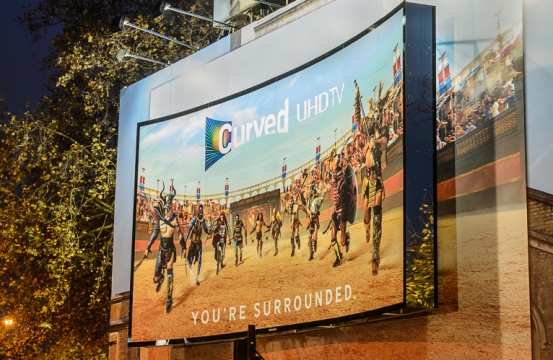 Cheil UK is delivering another UK outdoor advertising first, with a Samsung campaign that will dominate five major UK cities with super-sized replicas of its Curved UHD TVs. The campaign looks to build rapid awareness, desire and impact of the Curved TV, marking its biggest ever UK outdoor push.

Going live today until the 14th of December, each custom-built replica will showcase the most striking image from the epic ‘Coliseum’ TV ad for the Samsung Curved UHD TV and will run with the tagline “You’re surrounded”. Locations for the activity were hand selected by Cheil UK, following analysis into the areas with the highest traffic and the correct elevation for the installations to provide the biggest impact.

The structures are the first time a special build has featured on an outdoor banner, with the largest installed in Birmingham (15m width x 8.18m height) and Fulham (11.91m width x 6.5m height).

The OOH activity forms the major element of a wider integrated campaign behind the Curved UHD TV, the world’s first curved screen TV which includes TV, cinema and print. 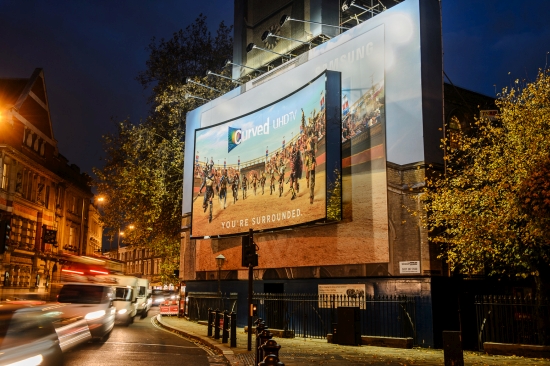 Commenting on the campaign, Guy Kinnell, head of TV and AV at Samsung Electronics UK & Ireland, said: “With the introduction of our Curved UHD TVs this year, we wanted to further push the boundaries of home entertainment technology with an outdoor advertising campaign that reflects our innovation and ambition in the most exciting way possible. We believe the curve is the next phase in the evolution of the home viewing experience; with design combined with revolutionary UHD technology, our TVs are bringing images to life for consumers like never before and this activity showcases this perfectly.”

Fiona FitzGibbon, head of media at Cheil UK, said: “During the past 18 months Cheil UK has delivered seven UK OOH firsts for Samsung, including rebranding Terminal 5, installing a sound shower at Eat Street (Westfield), and turning the IMAX blue.

“Samsung continues to push the boundaries of OOH, taking an innovative strategic approach that we haven’t seen from any other brand. No brand has ever attempted a multiple special build of this scale before. By building these immense structures on such a mammoth size and scale, we were able to really make a statement about Samsung and its Curved UHD TV technology.”

“Being the world’s market leader in the TV category and in technology is clearly having a halo effect on Samsung as the leader in OOH advertising,” Fitzgibbon adds.

The bespoke fixtures were produced by advertising display specialists Russell Signs. Tony Quinlan, managing director at Russell Signs, added: “We are delighted to be working with Cheil UK and Samsung once again on a project of such a prestigious nature.”