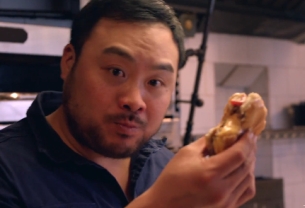 With its smooth taste and clean, crisp finish, Budweiser has long been known as the King of Beers, but now America’s No. 1 full-flavored lager is setting out to find the tastiest partner: a king of burgers. Budweiser has announced a national competition—with the help of award-winning culinary pioneer, Chef David Chang—to find the Bud & Burgers Champion through a coast-to-coast tour to find the best burger.

The winner of the Bud & Burgers Championship will win $100,000 to support their culinary ambitions. In addition, the winner will be invited to compete in a new cooking competition series, working title “United States of Burgers,” which will premiere on the Esquire Network.

“Both burgers and beer are experiencing a renaissance of sorts.” said Chang, who is well-known for elevating classic dishes, and for his love of lagers. “I love that there’s nothing pretentious about the combination – it just works. A full-flavored lager brings out the taste of a savory burger.”

Beginning today on National Beer Day – the official celebration of the repeal of prohibition of beer – burger enthusiasts 21 and older can submit a video or photo on Budweiser.com/Burgers showing their burger and explaining why they should be the 2015 Bud & Burgers Champion. Participants will have a chance to be crowned champion, holding court as creator of the best burger paired with a Bud. The Bud & Burgers Champion will also compete as a finalist in the “United States of Burger” television series.

Semi-finalists will compete head-to-head at 10 nationwide Bud & Burgers Championships events hosted at some of the biggest festivals throughout the summer, including Stagecoach Music Festival, Free Press Summer Fest, Chicago Blues Festival and more. For a complete list of festivals and details on the contest, click here.

The competition will culminate at the finale event hosted by Budweiser and Chef Chang at the Budweiser Brewery in St. Louis on July 11, where the Bud & Burgers Champion will be crowned. Chang will join Budweiser’s brewmasters as a judge at the final event.

“We’re bringing Bud and burgers home,” said Brian Perkins, vice president, Budweiser. “The grand finale will take place just down the street from where the burger was widely introduced to America: the 1904 World’s Fair. I think it’s safe to assume those burgers were washed down with an ice-cold Budweiser.”

Beyond the Bud & Burgers Championships events, fans can follow along and show their support during the program here.

The centuries-long relationship between Budweiser and burgers is about enhancing, not competing with, the taste of food. With this program, which includes a new national TV commercial campaign, Budweiser is working to educate burger fans nationwide about exactly how the beer’s crisp finish and aroma-enhancing carbonation can make burgers taste even better.

“Just like accomplished chefs, my brewing team takes taste and craftsmanship seriously,” said Pete Kraemer, head brewmaster, Budweiser. “We’re continuing the hard work that goes into each batch of Bud since 1876. And we’re proud to help highlight the taste of Budweiser in a new way.”

Following the Bud & Burgers Championships, Budweiser will be featured in the new TV series, “United States of Burgers.” The six-episode series, which debuts on the Esquire Network this summer, will put foodies, aspiring chefs and the winner of the Bud & Burgers Championship in head-to-head battles in a made-for-TV search for the perfect burger to pair with Budweiser.