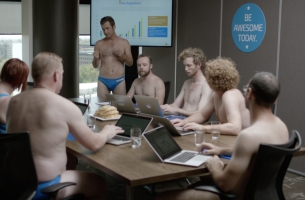 We've all heard about the amazing perks some companies offer their staff. But how much do you really know about a company before you sign on the dotted line and turn up for your first day?

Clemenger BBDO Melbourne has launched a campaign for SEEK’s new company reviews tool. A company review lets you uncover what a company is really like to work for - from the people who've actually worked there. SEEK company reviews are real reviews written by real employees, both past and present, which give you a genuine read on whether a job prospect is the right fit for you (or not).

All the free iced mocha lattes and massages in the world do not guarantee professional fulfilment. Conversely, a company that doesn't offer much in the way of perks may deliver far better job satisfaction, above average wages, lower stress levels and greater job security to its employees. How do you know?

So SEEK created company reviews to better help Australians plan the next step in their career, armed with as much knowledge as possible. SEEK company reviews currently have over 65,000 unique reviews about more than 1,000 trans-Tasman companies.

The average company rating is currently 3.6 stars out of five. Babi Kahveci, SEEK Brand & Candidate Manager says the key to a more fulfilling career is finding the right cultural fit for you: “More than half of the population have felt that a company didn’t live up to their initial impression – whether found in an interview, on their website or in a position description.  SEEK company reviews uncover what it’s really like to work for a company.”

"If you're thinking about taking a role with another company, there's nothing like a bit of insider knowledge to help make your decision easier. A company’s rating, whether it be great career development or work-life balance, is destined to become the way potential employees decide whether they will even apply for a job there," he said.

Clemenger BBDO Melbourne Creative Director Ant Phillips says the agency had a great time creating the campaign, getting to poke fun at some of the more outrageous 'perks' companies offer.

"More often than not, new employees won’t find out what it’s really like to work at a company until it’s too late. But with SEEK company reviews, you can find out about a company before you begin. It might just save you from having to endure a beach meeting in your Speedos," he said.

In partnership with Starcom and Isobar, the campaign was planned to align with SEEK’s evolving journey of becoming a career partner to candidates. The campaign launches with a roadblock across TV and video, bespoke social edits and transit outdoor that includes interactive panels encouraging first hand engagement with company reviews, in addition to a heavy digital display investment.