MailChimp’s latest campaign, 'Did You Mean…?' is about creating extreme cases of individuality and showing what breaks through 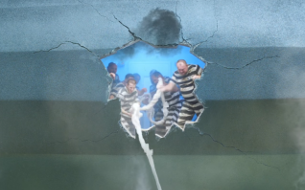 Starting with its name, MailChimp has been a beacon for not blending in. Although people have infamously mispronounced or mistaken their name, MailChimp is not so concerned with what people call them. They’d much rather show you who they are. Because they believe the best way to build relationships with customers, fans or anyone else is to be yourself. For them, that means having some fun with their name.

So Droga5 has taken the MailChimp name and riffed on it, being playful with all the different ways people might say “MailChimp.”

MailChimp’s latest campaign, “Did You Mean…?” is about creating extreme cases of individuality and showing what breaks through. With Droga5 at the creative helm, MailChimp is kicking off the campaign with three cinematic short films: MaleShrimp, JailBlimp and KaleLimp. The films have hit the silver screen in select theaters in New York, Los Angeles, Chicago, San Francisco and Atlanta, among other cities. Films will go be online starting January 23 and on television starting February 20.

One shrimp’s dream is another man’s sandwich. That’s the tagline for MailShrimp, a new short film out of eastern Europe, produced by Riff Raff Films and directed by English duo The Sacred Egg. But as with all the duo’s films, there’s obviously much more to it than that.

With a heartwarming musical number at its center, this intimate love letter to aspiration, which takes place in one small area of a humble mailroom, will keep viewers guessing until the very last frame.

What happens when children at a birthday party become accomplices in one of the most unusual getaways of all time? Enter JailBlimp.

In select cinemas, this film, produced by Riff Raff Films, who have worked with The Sacred Egg on many of their previous films (most notably KaleLimp and MailShrimp), is part everyday, part dream world that bucks convention. It’s a play on scale and reality that viewers won’t want to miss.

KaleLimp is an intimate portrait of an ordinary anniversary dinner that takes an extraordinary turn. While the short film exists on many levels—as an origin story, an argument for trying new things or even a commentary on modern dining—it is, at its heart, a love story. With dogs made of kale.

Produced by Riff Raff Films and directed by English duo The Sacred Egg, whose notable works include other short films such as JailBlimp and MailShrimp, the short owes a large part of its fledgling success to word of mouth and is even generating a bit of buzz among the indie circuit. The film is currently living online as well as in select cinemas throughout the country.

Hair and Make Up: Jana Dopitova