Run jump and drive with the Oculus Rift & Nissan Juke 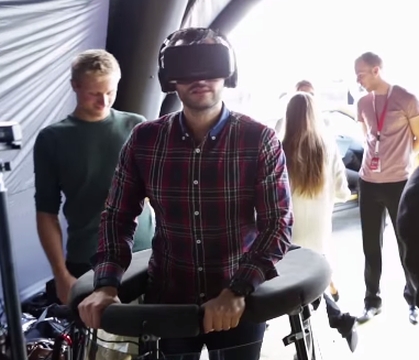 From October 4th to 19th, visitors to the Paris Motorshow can get a hit of pure adrenalin thanks to 'Chase the Thrill', an innovative virtual reality experience from Nissan.

In Chase the Thrill, visitors wear the immersive Oculus Rift DK2 virtual reality headset, to become a rollerblading android chasing a Nissan Juke in a virtual city. A special treadmill allows them to literally power themselves through the virtual environment with the motion of their own legs. As their avatar leaps from building to building, slides under obstacles and grinds down a crane at high speed to keep up with the Juke, the user will get an incredible sensation of immersion and movement that has to be felt to be believed.

The Oculus Rift DK2 from Oculus VR, a subsidiary of Facebook, is a new virtual reality headset that uses advanced tracking technology to provide 360° head tracking, allowing you to seamlessly look around the virtual world just as you would in real life.

As the consumer version of the Oculus Rift is not available yet, Chase the Thrill is a rare opportunity for the public to get a taste of this potentially game-changing technology.

Thomas Rodier, head of events at Nissan Europe, said: "People come to motorshows to discover new concepts and get excited about the future. That’s why with Chase the Thrill we hope to give people a taste of the future of gaming and interactivity. Like everything we do at Nissan, Chase the Thrill has technological innovation at its heart. And it’s also a completely new way to get a feel for the Juke: you don’t drive it, you chase it!"

Chase the Thrill has been developed by D2NA/DigitasLBi France, Nissan’s digital marketing agency, in collaboration with London-based production company UNIT9's VR studio, which has a track record of producing cutting-edge virtual reality content.

The "Chase the Thrill" dedicated Stand at Paris Motorshow will be located on the A2 terrace towards Pavillon 3.