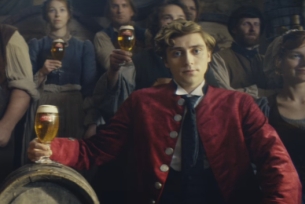 Ready for a quick history lesson? Then look no further, as the latest commercial for Stella Artois tells us the story of Sébastien Artois, and how he came to own his very own brewery.

Spectacularly filmed and superbly quirky, the charming spot tells how the young Sébastien sold everything he had to fulfil his dream of becoming head brewer at his own brewery.

The upbeat ad was conceived by Mother London, with direction from Riff Raff's Francois Rousselet.