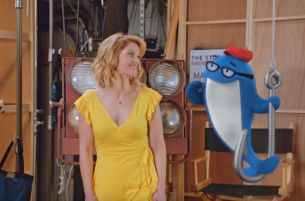 After 100 years at sea with its line of tuna and salmon, StarKist and Charlie the Tuna have come ashore with the launch of the brand’s first-ever line of chicken products. The Chicken Creations line will be backed by a national paid media campaign that includes print, digital media and two television spots.

The campaign, from Harrisburg, Pennsylvania-based food and beverage agency quench, enlists both Charlie and Candace Cameron Bure, star of 'Full House' and 'Fuller House.' Bure will help launch the new chicken line-up by positioning the single-serve pouches as a way to fuel her active lifestyle as an actor, director, producer, exercise enthusiast and busy mum.

The TV spot, titled 'Chicken,' features Bure backstage on a set reacting to Charlie’s news about the arrival of Chicken Creations.

The appearance by Charlie in the Chicken Creations TV spot is part of recent efforts by quench and StarKist to revitalise the iconic spokestuna, including a 3-D makeover and a more prominent marketing role.