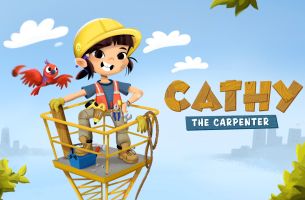 Today, on the eve of International Women’s Day, the charity Inspiring Girls International founded by Miriam Gonzalez launches a new campaign about gender disparity and stereotyping affecting our children through childhood role models.

This campaign builds upon last year’s campaign, #RedrawTheBalance, which shone a light on the fact that gender stereotypes form between 5-7 years of age. This year the campaign focuses on one of the key reinforcers of those stereotypes – the animation industry.

The campaign, ‘It’s Time To Get Animated’, exposes the gender bias in childhood cartoons where only 29% of all animated characters are women. These role models shape our children and ingrain gender stereotyping at a young age, as they watch and learn from Bob The Builder, Postman Pat alongside the few princesses or lovelorn females.

Launching today, 'It’s Time to Get Animated' will reveal the characters that children don’t yet see and invites the viewer to #RedrawTheBalance.

The pro-bono campaign has been made for the Inspiring Girls International by leading creative agency MullenLowe London. The charity, set up and chaired by Miriam Gonzalez, is dedicated to raising the aspirations of young girls around the world by connecting girls with female role models. To make a difference volunteers can sign up here and pledge just one hour per year to visit a school to talk to a group of girls about their life, career, ups and downs, choices and experiences in the work place and in life.

Miriam Gonzalez explains: “There is an inner role model inside every single woman and young girls should look up to them to realise the possibilities they have in life. That is why we have set up Inspiring Girls International. Because we want to make it easy for girls all around the world to have access to female role models no matter where they live. This campaign reveals how from a very early age, children receive a stereotyped vision of the world. The lack of female leading characters in animation is just the reflection of an unbalanced society and affects the self-confidence of girls that continues later on in their lives.”

At the centre of the campaign an online film, directed by Sophie Markatatos at Strange Beast, follows female animator Sophie Marka talking about how, in her industry, lead characters are still mostly men. The film is supported by four print executions; ‘Angela The Astronaut’ designed by Lizzie Campbell, ‘Cathy The Carpenter’ designed by Be Towers, ‘Sally The Scientist’ by Ariane Pelissoni and ‘Carla The Coder’ by Abigail de la Cruz.

Behind the scenes in the creative industry, only 20% of animators are female. MullenLowe London challenged this industry norm by building an almost entirely female team including the animator, four female illustrators, editor, director, sound designers, musicians and producers.

Richard Denney, ECD of MullenLowe London comments: “The creative and media industry clearly plays an important role in a child’s early perception of the world and how they see their place in it. The stats are shocking, both onscreen and behind the scenes, and we have a huge responsibility to act so that girls aim high and become the future. Other than a couple of token men including myself, we made sure the team surrounding this incredible project was built on female talent. You have to practice what you preach.”

The 2016 #RedrawTheBalance film, shot on location at Whitstable Junior School in Kent with 20 children between the ages of 5 and 7, was an enormous success, attracting 30 million views and famous influencers including Emma Watson, Geena Davis, Sir Ken Robinson and NASA.