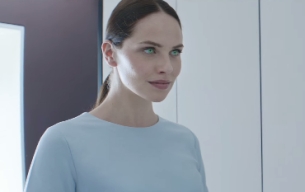 On Sunday 10th May, a shop mysteriously popped up on Regent Street. The shop front heralded the arrival of Persona Synthetics – a brand of highly developed robotic servants or ‘Synths’.  Channel 4 viewers will also have noticed a primetime TV ad for the brand.

The curious brand and the shop’s wares have been baffling twitter and is the number one Google trend in the UK with over 100,000 searches to date

Channel 4 has now revealed the launch of the Persona Synthetics store and brand are part of a marketing campaign to promote upcoming ambitious drama Humans set to air on Channel 4 this summer. The series, starring William Hurt, Colin Morgan, Gemma Chan, Katherine Parkinson and Tom Goodman-Hill is set in a parallel present where the latest must-have gadget for any busy family is a ‘Synth’ – these are manufactured by fictional company Persona Synthetics.

Every element of the campaign activity carries #Humans and encourages audiences to visit www.personasynthetics.com for more detail. The site has received 423, 000 visits to date.

Channel 4 Marketing, 4Creative - Channel 4’s in-house creative agency and media agency OMD UK decided to bring synthetic humans into the real world, creating a campaign from the perspective of the brand Persona Synthetics and the illusion that these products are available for purchase. The campaign was brought to life across multiple channels with partners Microsoft, eBay, Rocket, Schneish and Fuse Sport + Entertainment.

Channel 4’s Head of Marketing James Walker said: “The world of Humans is perhaps closer than we think. This campaign seeks to engage viewers in a mischievous way with the questions the series raises about artificial intelligence; How will AI affect our relationship with technology and each other? Would you buy a Synth to be a part of your family?”

As well as the TV promo and eye catching shop front for Persona synthetics, there are also social accounts for the brand and an eBay store, featuring a first of its kind mock auction inviting visitors to the site to bid on a ‘Synth’ - 200,000 people viewed the auction in its first 72 hours.

Within the store front two interactive screens showcase two metre tall ‘Synth’ models that employ sophisticated Microsoft Kinect technology to track and interact with their audience, mimicking and reacting to their movements. The technology can sense up to six people at a time, tracking even the smallest details of their facial expressions.

Those curious to know more and searching the brand online have found the company’s (fictitious) website which houses the reveal that this is, in fact for the show, Humans.

Passers-by will continue to be beckoned over by the life-like sophisticated 3D male and female ‘Synth’ models showcased in the shop front until Saturday 17th May. The shop is located at 172-178 Regent Street, London W1 and is owned by The Crown Estate – the Humans activity represents the first time an activation of this kind has been permitted by the owners.

4Creative’s 30 second TV promo has attracted half a million views online and an extended version will launch on air on Channel 4 on Wednesday 13th May to reveal the brand’s link to Humans.

Frazer Hurrell, Creative Technologist at Microsoft said: “Our collaboration with Channel 4 is a great example of how Microsoft is evolving the traditional advertising experience for consumers by combining innovative technology with creative ideas. We were able to use Kinect technology to create a unique futuristic experience, encouraging curious passers-by to interact with the Synths to unlock more information on their features. Microsoft is passionate about using technology as a canvas for creativity and we’re always on the look-out for new ways to create engaging experiences for brands.”

Rob Bassett, Advertising Sales Director at eBay said: “This is a really exciting, watershed campaign for us. It was both a privilege and a natural fit for us to set up a listing - albeit a spoof one - on ebay.co.uk to give Humans a strong digital presence that resonated with Channel 4’s target audience, by applying sophisticated targeting to eBay’s 19 million unique monthly users. It’s the first of its kind that we’ve done in the UK, and opens the door for us working on more multichannel, brand building campaigns in the future.”