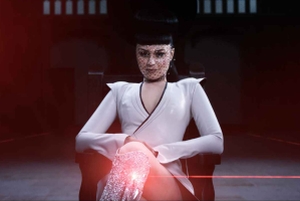 On Sunday 14th December during the X Factor Final on ITV, Channel 4 will introduce the nation to an alternative pop artist – Viktoria Modesta. Launching as part of the channel’s brand campaign, ‘Born Risky’, a promo for the song Prototype will premiere to millions of viewers during the ad break, with the audience invited to watch a full length video at www.channel4.com/bornrisky.

The promo presents Viktoria, every inch a new contemporary artist ... but with a difference that sets her apart from the idealized form of a pop artist. A prosthetic limb.

It is a difference too far for the music industry to date, and the reason why Channel 4 has given her this important platform.

Viktoria challenges our pre conceptions of what a pop artist could be. She treats her amputeeism as empowering, as part of her artistic expression which can thrill and influence - not an accident of nature which demands sympathy. She defies being categorized and makes us re –think meaning of the word ‘disabled’. In the same way that Channel 4’s Superhumans campaign during the London Paralympic Games in 2012 altered perceptions of disability in athletics, Viktoria’s Prototype shines a light on stigma, questions normal ideas of sex and beauty and celebrates being different.

“Channel 4 was born to be different: to offer alternative perspectives and to take creative risks, especially with new talent. In a world of homogenized pop, Viktoria is those values in a nutshell. We are honoured to help her develop her career and change attitudes to disability in the process.” Dan Brooke, Chief Marketing & Communications Officer, Channel 4.

“Like Viktoria Modesta herself this project is inspiring, unique and very hot. Pop stars these days are painfully dull and manufactured. She is the perfect partner for Born Risky and Channel 4 as she embodies our governmental remit of championing alternative voices and establishing new talent. We wanted to build on the legacy of the Paralympics work so we asked ourselves “Why are there no disabled pop artists?” Then Viktoria marched into our lives. She’s the real deal. She just needed someone to take a risk on her...” Chris Bovill and John Allison, Heads of 4Creative.

Viktoria is a British singer-songwriter and model who took the radical decision aged 20 to undergo a below-the-knee amputation to improve her mobility following difficulties at birth which left her with a damaged left leg. A true non-conformist, Viktoria has pursued a career in music and modelling, including performing at the closing ceremony at the Paralympic Games in 2012, however certain doors have remained closed due to her amputeeism.

“For a long time, pop culture closed its doors on me as an amputee and alternative artist. I think people have always found it hard to know what to think or feel about an amputee who wasn’t trying to be an Olympian. In sports, ‘overcoming' a disability makes you a hero, but in pop there is no place for these feelings.

culture, with other artists, where I have always known I belonged. I want people to feel new feelings that they didn’t know they had. The time for boring ethical discussions around disability is over. It’s only through feelings of admiration, aspiration, curiosity and envy that we can move forward.

Through this project with Channel 4’s ‘ Born Risky', I’m hoping to set new principles in music and fashion, to rip up the rule book and develop a more empowering example of what it means to be a musician, model and artist.” Viktoria Modesta.

“Through this video, pop culture had to engage the physical reality of amputation as a poetic concept rather than a medical procedure. The video had to create an unapologetic and less ‘morality-riddled’ forum for someone like Viktoria to exist in the mainstream. Like Viktoria, it bores me that the only way an amputee can be relevant is to achieve something that people easily understand. Culture currently dictates that we view disability from a position of wholesome admiration and empathy. This video challenges that convention”. Saam Farahmand, Video Director.

In a special ‘Making of Film’ Viktoria talks about her childhood, her background and her inspiration behind the collaboration. We also meet the woman behind the creation of the bespoke prosthetic legs which feature in the film Sophie de Oliveira Barata and the video director Saam Farahmand.