Made by 4creative, the mysterious virtual reality gaming innovation campaign succeeded in spooking the British public 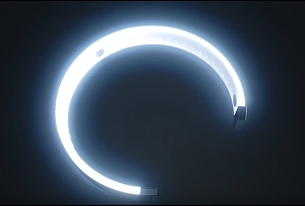 On Saturday 3rd March, Channel 4 left viewers bamboozled when the broadcaster aired a brand new primetime TV ad promoting state-of-the-art tech innovation.
The AzanaBand, claimed to be ‘the world's first sensory gaming device’ which simulates happiness, fear and pain.
Channel 4 today reveals the mysterious ad marked the launch of its innovative marketing campaign, designed to generate intrigue and excitement for brand new thriller, Kiss Me First which climaxed last night with the on-air premiere of an exciting full-length trailer.
Kiss Me Frist tells the story of Leila, a lonely 17 year old girl who is addicted to a fictional online gaming site, and its characters who escape the everyday through virtual reality to Azana, where the possibilities are endless. The series combines live action with computer-generated virtual world sequences in a TV drama first.
Responding to a brief from Channel 4 Marketing, Channel 4’s award-winning in-house creative agency, 4Creative, worked in collaboration with media agency OMD to create the unique campaign.
Having watched the AzanaBand TV ad, viewers were directed to Azanaband.com where they discovered that the product, worn around the neck, ‘brings virtual reality gaming to life.’ The website which has had 346,000 visits to date revealed a brief first look at Kiss Me First for those that were curious to find out more. 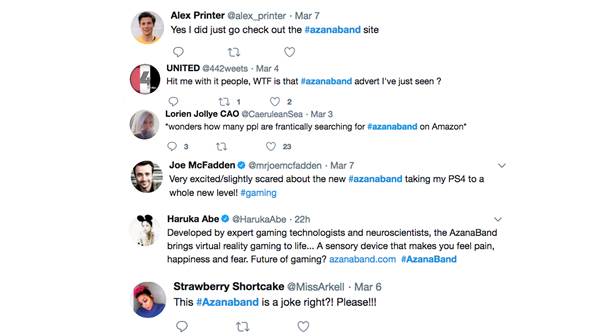 Building on the TV activity and website Channel 4 teamed up with Bristol based YouTube gamers Hat Films (part of The Yogscast network) who published an ‘unboxing’ video titled *REAL PAIN* in VR! on their channel of almost one million subscribers.
This marks the first time Channel 4 has worked with influencers in this way.  Watching the product unboxed on a trusted gaming channel created further ambiguity for gamers as to whether the AzanaBand was available for purchase, despite it being linked to Kiss Me First on the website. 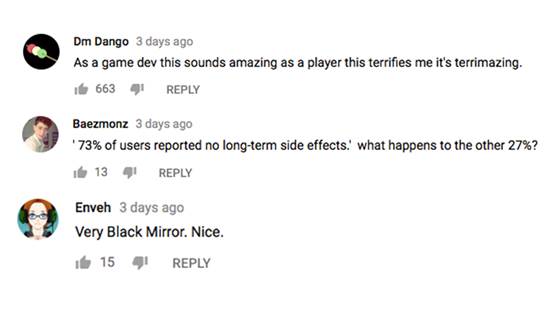 This was further fueled by sponsored articles on popular TV, Film and Gaming entertainment site, Den of Geek that announced the ‘Mysterious new AzanaBand‘ revolutionary gaming device whilst promotional AzanaBand posters appeared in London and Manchester.
James Walker, Head of Marketing said: "The innovative use of VR gaming in Kiss Me First provided us with an exciting, creative opportunity to bring the game to life through our marketing campaign. The multi-layered approach was designed to excite gamers in the first instance and to get people talking. The campaign has been brilliantly executed by 4creative, OMD UK and our creative partners. We are thrilled with the response so far."
Alice Tonge, Head of 4Creative said: “Kiss Me First is a brilliant show with a very unique audience, so to get their attention we needed to do something innovative and different. To create intrigue, excitement and a genuine buzz around the show, we partnered with influencers and launched the AzanaBand as if it were a real-life gaming product.”
Kiss Me First is coming soon to Channel 4.
view more - Creative