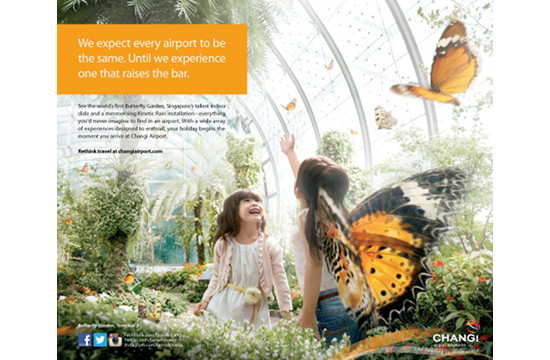 The most that travellers typically expect from an airport is efficiency and smooth connections. Changi Airport, which already has that all mastered, has launched a new brand campaign that highlights the many unexpected experiences it offers and positions the airport as an exciting starting point of the holiday itself.

The campaign invites travellers to look at Changi from a new perspective that highlights its key – and unexpected – attractions - including the world’s first Butterfly Garden, Singapore’s tallest indoor slide, a kaleidoscope of dining experiences and a mesmerizing Kinetic Rain art installation.

Each visual reveals an unexpected image that ignites the imagination and encourages travellers to do a double take with an artful and elegant use of a juxtaposition of elements within the visual. “We expect every airport to be the same. Until we experience one that raises the bar,” reads one of the ads. The call to action, “Rethink travel at www.changiairport.com/rethinktravel”, challenges travelers to put aside their pre-conceived notions of what an airport should be, and to arrive early for their flight to enjoy all that Changi Airport has to offer.

“Only an airport that constantly redefines what airport is can own the idea of ‘rethink travel’,” says Valerie Cheng, Chief Creative Officer of JWT Singapore. “Changi is the global leader in the airport category, and we’re proud to help spread the word of what this unique brand has to offer.” 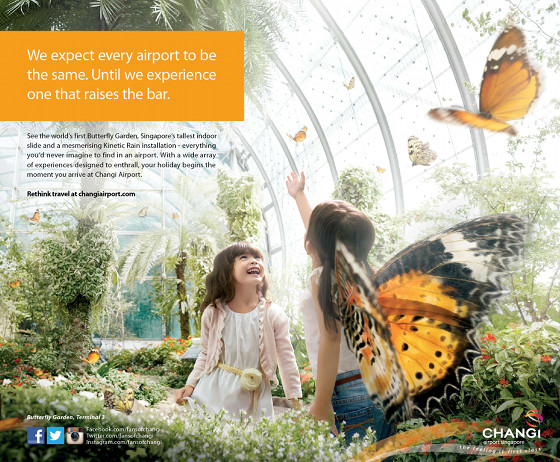 Changi Airport, which was named 2013 “Airport of the Year” by Skytrax, is the most awarded airport in the world, with over 440 awards to date. Changi serves over 100 airlines flying to 250 cities in  about 60 countries; it also has over 350 retail stores and 120 food and beverage outlets, five gardens,  movie theatres, and a swimming pool, amongst the myriad of facilities across airport's three terminals.

 The new campaign highlights that Changi is more than just an airport, and continually moves to raise the bar for travel and services.

“We innovate and push the boundaries on every aspect of what we do, every day, so we can
continually offer more to travellers,” said Ivan Tan, Senior Vice President, Corporate and Marketing Communications, at Changi Airport Group. “Our new campaign shows that Changi is more than just a leg of your journey – it is where your holiday begins.”