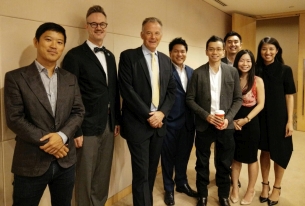 J. Walter Thompson, which first won the business in 2013, will continue its role in advancing the brand’s communication vision across all parts of the business, including operations, commercial, and air hub services.

The agency also expanded its remit with Changi in 2014 to include a wider digital portfolio, launching changiairport.com and changiairportgroup.com.

Ivan Tan, senior VP for corporate & marketing communications at CAG said, “We are delighted to be continuing our partnership with JWT – to share the exciting Changi Airport story as we roll out new concepts and facilities and to engage with our passengers and fans. Just as we thrive on innovation and creativity in how we manage the airport, we look forward to adopting the same philosophy with JWT in our communications and marketing programmes.”

Changi’s target market includes business and leisure travelers, as well as tourism partners and airlines. Changi, which has won over 500 best airport awards, serves some 100 airlines flying to 320 cities in about 80 countries. The airport, which has 350 retail stores and 160 F&B outlets, has also introduced concepts never before seen in an airport, such as double-storey stores for wines & spirits and cosmetics & perfumes, a butterfly garden, an indoor slide, and one of the largest kinetic art sculptures in the world. In 2014, Changi Airport set a new record, achieving more than 54.1 million passenger movements.

“We are incredibly proud to have been chose by CAG to continue our partnership. It is an honour to play our part in helping further enhance the world famous Changi Airport brand, and contributing toward maintaining its position as the number one airport in the world,” said Peter Womersley, CEO of J. Walter Thompson J. Walter Thompson has created a series of successful campaigns for the airport over the last two years, including ‘rethink travel’, a brand campaign that highlights the many unexpected experiences it offers and positions the airport as an exciting starting point of the holiday itself, and “I’m Home”, an online campaign designed to both celebrate the company’s vision and culture, and pay tribute to the nation’s 50th birthday.

The agency has also produced a number of successful content series for key markets, including “Behind Changi”, a high-energy content series featuring Singaporean TV host Michelle Chia that shares the untold stories of the people, processes and technology that makes the airport number one.

“Changi Airport is a truly global brand that every Singaporean can be proud of, and we’re honoured to be entrusted with the challenge of co-writing the next chapter in the Changi story. This is testament to the all-in, all-out teamwork across the agency — something that continues to define our work and culture,” said Victor Ng, Executive Creative Director at J. Walter Thompson Singapore.