World champion drivers Jenson Button and Fernando Alonso race each other against the backdrop of the Domaine Chandon winery. 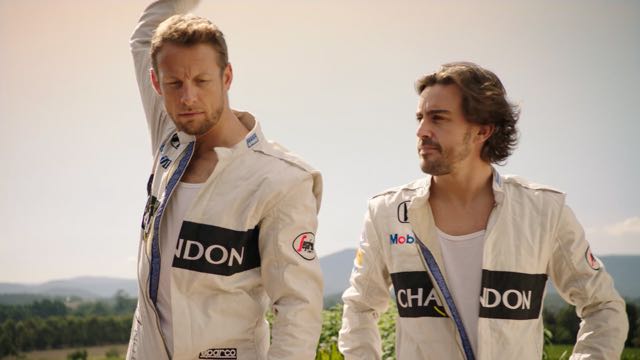 To celebrate the 2016 Rolex Formula 1 Australian Grand Prix, Chandon and McLaren-Honda have released the first content piece as part of their new long-term, global partnership.

Starring two world champion drivers, British F1 legend Jenson Button and Spanish racing star Fernando Alonso, the video via Red Agency sees the two aces race each other in a series of fun and unusual challenges against the serene backdrop of the beautiful Domaine Chandon winery.

In a F1 race like you've never seen before, the two drivers don their suits and helmets and start with a sprint through the vineyard complete with push bikes. Next they jump on to motorbikes, Segways, boats and even tractors, with the competitive spirit of Alonso and Button creating a dynamic race of one-upmanship. Always striking a balance of focus and fun, our drivers race across the Domaine Chandon winery estate. From the dark cool Riddling Hall where they carefully avoid spilling bottles of bubbles, to the bright Tasting Room where they meet guests who are relaxing and enjoying their afternoon at the vineyard, it's neck and neck until they reach the finish line.

Says Ashley Powell, marketing director at Chandon: "Australia is the first Chandon market to work with McLaren-Honda and we're thrilled to be able to launch our partnership with such a vibrant and unique piece of content. Fernando and Jenson were great to work with. They both can be a bit competitive and are known for having a bit of fun, so our content idea worked perfectly! I'm looking forward to seeing this conquering spirit carry them through for a successful outcome in the 2016 Formula 1 season."

Red Agency was appointed to manage all marketing and communications activity for the launch of the partnership after a competitive pitch in December.

Says James Wright, managing director at Red Agency: "Our idea was to create tension and excitement with some fun challenges for the boys but equally bring the Chandon spirit to life through a feeling of style and spontaneity throughout."