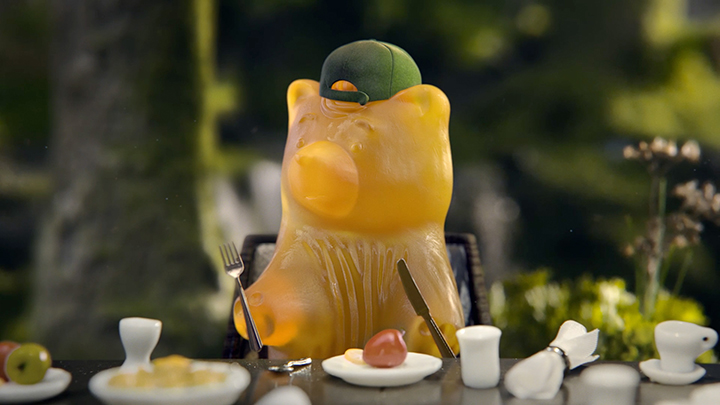 The “reality” series, titled “The Real Gummies of the Black Forest,” features the hijinks of The Organics, a family of well-off gummy bears living lavishly in the forest. The campaign debuted this month with a teaser and the first three 30 second episodes.

“We instantly fell in love with the characters of ‘The Real Gummies of the Black Forest’ when Tom, Dick & Harry introduced them during our first creative reviews,” says Jill Manchester, SVP Marketing and Brand Strategy for Ferrara Candy Company. “They demonstrated the value of our brand, which is delicious, tasty and USDA Certified Organic, but they didn’t take themselves too seriously. These gummy bears have the perfect personality and attitude for our brand. And a family with this much natural flavor deserves to be famous.”

“Shuttlecraft really captured the aesthetic we were going for, in amazing detail,” comments Bob Volkman, Tom, Dick & Harry, Creative Partner. “These are bears of privilege and their chaise lounge chairs had to be certifiably Baker or forget it. They definitely put their snooty hats on when crafting our miniature Black Forest.”

Shuttlecraft, known for its richly detailed and refined animation and CG capabilities, jumped on the opportunity to help Tom, Dick & Harry and the Ferrara Candy Company realise the crazy, fun and quirky shenanigans of the Organics.

“After reading the scripts, we immediately knew that Tom, Dick & Harry had developed a great hook and characters that are genuinely authentic and funny,” says Ronnie Koff, Executive Creative Director of Shuttlecraft. “I mean, where else are you going to see gummy bears streaking? We also recognised that in order to bring their concept to life, we needed to create CG gummies that could move around and interact believably with each other all while looking juicy and delicious.”

In order to achieve this goal, Shuttlecraft channelled their experience in creating photo-real food for such clients as Hershey’s, Yoplait, and Kellogg’s. In the creation of the set, model-makers and puppeteers David Bell and Joe Scarpulla hand-molded and sculpted a 1/12 scale version of the Black Forest measuring over eight feet long. Shuttlecraft also utilized a 3D printer to create many remaining set elements as well.

“David and Joe were perfect for this project,” says Koff. “They are artists, sculptors and craftsmen, and are singular in their ability to create miniature environments with an immense amount of detail and nuance. While both David and Joe continue to create stop-motion masterpieces, they will be an ongoing integral part of the Shuttlecraft team in creating our unique blend of CG with physical model-making.”

Once the forest and the bears were complete, Shuttlecraft seamlessly combined the CG elements with its live-action plates. Tom, Dick & Harry then hired voice actors to bring to life the stars of “The Real Gummies of the Black Forest.” It took two weeks for the set build and the shoot, with the entire process taking a total of eight weeks.

“Tom, Dick & Harry was an incredible partner,” concludes Koff. “This was our first collaboration together -- and their first foray into character animation -- so we wanted to make them as comfortable as possible with the creative process. They were open-minded, receptive to our ideas, and passionate about creating something one-of-a-kind together. We're grateful they took the creative leap with us.”