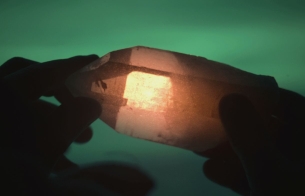 Ben Strebel and Caviar’s first collaboration since joining forces at the end of last year, is a mysterious & intriguing promo for band of the moment Kate Boy & their new single “Higher”.

Set amongst the beautiful yet desolate landscape of Kiruna & Abisko In Sweden, we are introduced to a world where every  light source whether natural or artificial burns green, which as the young director explained is a  metaphor for a society under the watchful eye of an oppressive force – all they have ever known is this light.

We follow several characters as they fight against the heavy dictatorship where individuality is not tolerated, where people choose to lock themselves away……or be locked away by force. The production wasn’t without its difficulties. All the extras were street cast, which was tough in  a town of only 18,000 people, as well as having to fight against the natural elements where there is only 5 hours of sunlight and the conditions outside got to as cold as minus 30 degrees, but the result is a sophisticated, stunning film & an exciting way to start the year for Strebel.

“The reason this film came together was that the band and I went on this journey as collaborators. From street casting to working in minus 30 degree conditions, the band were hands on and always helpful - a joy to work with and co-conspirators in the making of this strange world in the ice and snow. I hope we work together again soon!” commented Strebel.