Trends and Insight 241 Add to collection

On inspirations, achievements, souvenirs and more 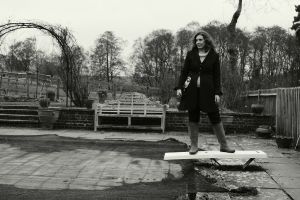 British-born film and television director Susanna White has won a host of awards for her film-making. Having started out in documentaries she moved into drama in 2001 and within four years won a BAFTA for her work on Bleak House. She has worked with some of the world’s greatest writers from Andrew Davies and Tom Stoppard to David Simon and Emma Thompson. Her work with David Simon on Generation Kill yielded eleven Emmy nominations and provided a breakthrough role for Alexander Skarsgård. Never afraid of new challenges White’s spy thriller Our Kind of Traitor was released in May 2016. Click here to view her reel.

Q> Who or what inspired you to become a director?

SW> When I was about eight, and a Brownie, I went to watch the kids’ show Crackerjack being made. I remember being fascinated by the red light coming on on a camera and that shot appearing on a monitor. Something lit up inside me then that has never gone away. I begged my parents to buy me a Super 8 camera and started making films of my friends - bike chases at the rec and so on. I learned to edit by borrowing a book from the library.

I have two early memories of the cinema. The first was the original Dr. Doolittle which I saw at the Odeon Marble Arch. I’ll never forget the magic of the worlds that film created. Not long after, my parents took me with them to see Kubrick’s 2001: A Space Odyssey. From the opening titles onwards I was hooked.

Q> What achievement are you most proud of?

SW> It has to be making Generation Kill. To shoot for four months in Namibia, South Africa and Mozambique, re-creating the American invasion of Iraq, was probably the toughest thing I’ve done but the one that was most stimulating and the one I’m proudest of. It was physically grueling but I got through it by being trained five days a week by US Marines. Working with talent like David Simon (writer/ producer) is as good as it gets. I’d never done CGI or action before I started the job and the learning curve was steep but it taught me that anything is possible if you focus and are not afraid.

Q> How do you approach a script?

SW> I always try to remember my very first reaction. That virgin read is crucial. Instinct is very important to me and I make notes straight away, then sleep on it and revisit. Usually my first notes are the best ones. I also really love collaborating so it is very important to me to hear from the writers about the ideas behind the script and where they are coming from in order to do the best job I can. I gather lots of visual references and in the case of a movie, watch a lot of films in that genre. Casting is also a very important part of my process - often specific actors will come to mind as I read.

Q> When not directing how do you like to spend your downtime?

SW> Nature is very important to me - I get my ideas from it and it puts things in perspective. My partner is a farmer so I spend a lot of time in a rural part of Sussex. I need the stimulation of cities too but I like to be right in the heart of things or right out. That’s probably a reaction to having grown up in suburbia. I was filming in New York just before Christmas, then home to long walks with the dog and log fires - I love that kind of balancing act.

Q> What’s the best souvenir you’ve taken from a shoot?

SW> A cheque written by Lord Lucan for gambling debts. It was given to me by his accountant when I made a documentary about him.

Q> What piece of advice would you give your 14-year-old self?

SW> Don’t worry so much. Someone will think freckles are beautiful.

Q> Was there a palpable sense of pressure filming a John le Carré adaption (Our Kind of Traitor) for the big screen?

SW> Le Carré is an iconic brand and there is a huge sense of responsibility when you take it on. At the same time, it is important to be true to who you are as film maker - you have to remember that is why they gave you the job in the first place. Working with a living author has the huge advantage that you can ask them about what they’ve written and he was very generous with his time.

Q> Do you have a film/piece of music/book that you keep returning to?

SW> The film I consistently go back to, and always find something new in each viewing, is Jane Campion’s The Piano. She has been such a role model for me - a woman with real confidence in her particular voice. Plus, Michael Nyman’s score is amazing.

Q> What methodology do you adapt when shooting? Is there much improvisation involved?

SW> It all depends on the piece of work. Some writers I’ve worked with, like Tom Stoppard, mean that it is all about very precise dialogue, and on Parade’s End I’d rehearse quite a lot with actors like Benedict Cumberbatch and Rebecca Hall before we shot. In other cases I love to improvise. For Our Kind of Traitor Stellan Skarsgård and I improvised around his relationship with his wife (Saskia Reeves) and in a couple of commercials using real people we have improvised too - with the approval of the client! Often it keeps things fresh and you can get wonderful unexpected surprises.

Q> What are you most looking forward to about the future?

SW> Making more commercials. I love doing them and want to do more.