Cartoon Heroes: Animation to Clear Out the Cobwebs 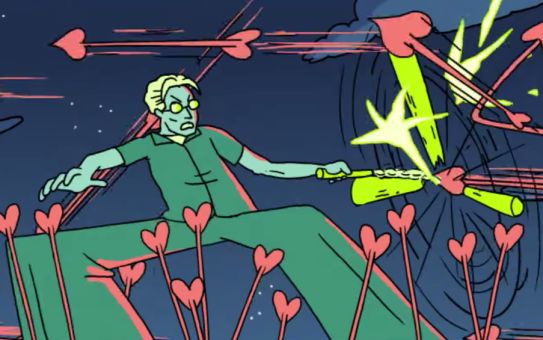 Get yourself a cup of tea, turn your Out of Office on, tell your colleagues/friends/loved ones that you’re in meetings all morning and enjoy.
25 Years of Photoshop – Dream On
Trusty old Photoshop, the mainstay of the creative industries, turns 25 this year – and anything other than a stunning celebratory film just wouldn’t do it justice. Agency Goodby Silverstein & Partners created ‘Dream On’ in-house, animating genuine Photoshop project files submitted by designers around the world. It’s a pretty simple idea but it also shows that with animation sometimes the technique can play an integral part of the message.
Seeing Energy through Fresh Eyes
Not since Clive swung by with Clint has a more convincing fictional orangutan graced our screens. There are shots in The Mill and Academy director Frederic Planchon’s SSE commercial that still make us look twice. The VFX team, led by ECD Neil Davies, built ‘Maya’ the ape from the inside-out, developing an anatomically accurate skeleton and musculature while the animation team dug deep into her emotional core.
Boys Latin
Esoteric directing collective Encyclopedia Pictura teamed up with Israeli animator Eran Hilleli to create this vibrant music video for Panda Bear. We’ll shut up now so you can get on with the important business of watching it.
Royal Blood
Blink’s David Wilson and Adult Swim’s Christy Karacas’ explosively violent promo for Royal Blood brought out our inner teenage boys – even (especially?) for the members of the LBB editorial team who are definitely over 19 and not male.  A gloriously insane blend of cinematic live action and anarchic NSFW animation means that this promo is going to be etched in our brains for a very long time to come.
Earthworm Heart
Definitely an ‘oh my god watch THIS’ moment in the LBB editorial team. Trunk’s Alasdair + Jock took us to a very dark (but morbidly satisfying… or is that just us?) place with their sinister promo ‘Earthworm Heart’ for Tom Fun Orchestra. It’s an elegantly murky affair where the line between good and evil is, well, non-existent.
Fable
MPC and RSA bring Aesop’s enduring fable up to date with a contemporary and personality-packed re-imagining of ‘The Tortoise and the Hare’ for Mercedes’ Super Bowl 2015 spot. The character design wins the race for us, and the 3D animation manages to be both cartoonish and grounded in realism.
Give Luci
The combination of refined silhouettes and warm, glowing art direction gives this tale about energy poverty an engaging, storybook feel. Created by director Mary Nittolo at NY animation house The STUDIO and agency FCB Garfinkel, it’s a beautiful awareness-raising spot for MPOWERD’s solar-fuelled lamp Luci.
Left Behinds
When we first saw this Freeview spot, we had to quiz VFX house Electric Theatre Collective’s Lee Pavey about how they created it. How much of it was puppetry and how much was animated? Turns out all of the jumble sale characters were made in 3D – either our eyes are not as sharp as we thought or it’s spot on 3D animation. Directed by Rogue’s Sam Brown and brought to life by ETC, this one was hugely popular with our readers.
Brick Bowl
We started to fall a little bit in love with A+C Studios with their Bagpuss-esque Christmas spot for department store Harrods, but with Brick Bowl that emotion has turned into awe. 36 hours after this month’s Super Bowl, the team had created this ambitious ode to the night’s biggest, craziest ads. In Lego.
Wayne the Stegosaurus

Ken Nesbitt’s poem Wayne the Stegosaurus gets the Motionpoems treatment from Mill+ artists Aran Quinn and Jeff Dates. It’s totally adorable, but beneath the cute façade there’s some clever hybrid animation trickery going on as the pair combine 2D and 3D animation to create a textured, illustrative and contemporary style.

League of Legends
It’s a double whammy for online games publishers Riot Games as they give the most played video game on the planet, League of Legends, some animated flair. Riot have shown some real creative savvy by teaming up with Passion’s Arnaud & Jerome for an energetic music video and Strange Beast’s Shy the Sun for a more melancholic exploration of one of their most popular characters.
Lucy and The Boy
Another striking example of how the choice of animation style and tone can really elevate the message of a campaign here. Hornet Inc’s Yves Geleyn and directing duo Dan & Jason created a spot each for Leo Burnett’s latest NSPCC work. Both films tackle the dangers of oversharing online. The bold and playful aesthetic is subversive, juxtaposing childish innocence and playfulness with the sinister reality.
Twinings Tea
It’s time for something breezy and bright, and this recent Twinings spot from Blinkink’s Parabella and AMV BBDO hits the spot wonderfully. Parabella – a.k.a Mikey Please and Dan Ojari – whipped up a set handcrafted from paper and put a modern spin on the multiplane animation techniques pioneered by Disney in the 1930s.
#LowesFixInSix
Who says short can’t be sweet? Here’s a winter warmer from BBDO New York and production company Humble that sees a helpful yeti come to the aid of a snowbound driver. It’s a timely and responsive Vine which is sure to strike a chord with those stuck in the seemingly endless Eastern Seaboard winter.
Welcome to Airbnb
160m2 of plywood, 300m3 of polystyrene and 12L of glue, 30 people and five weeks: this Airbnb project from Cirkus for TBWA and Sixtoes Singapore may look like a tiny world but it was most definitely a big project.
Noel

Another snowy festive animation to get the old heart rate back to normal. Prepare to be charmed by Hornet inc's Peter Sluzska as he revisits the 1964 Rudolph movie for fashion brand Hermes.

The Last Game
OK, if you work in advertising you've already seen this, but Passion Pictures' ambitious, slick and (dare we say it, Pixar-esque?) World Cup spot for Nike was one of the biggest campaigns (animated or otherwise) of 2014. And with awards season crunching into gear, you haven't seen the last of this.
view more - Creative