"How far can a gallon of gas go? A lot farther than you think." 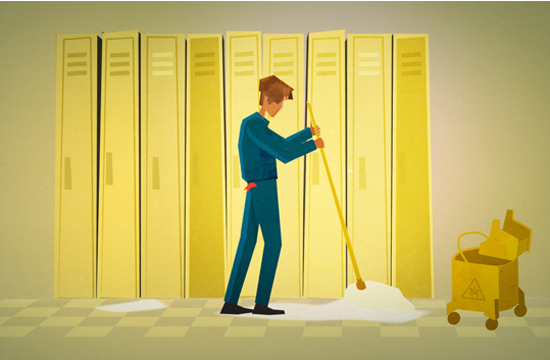 Minneapolis-based ad agency Carmichael Lynch recently tapped broadcast design and animation studio motion504 to help create an inspirational animated short for Fueling Good, a charitable giving program by CITGO®. Led by Creative Director Amy Schmitt, motion504 provided its visual storytelling talents to illustrate the impact of giving, with an empowering story about a filmmaker who makes a documentary about a homeless girl. The character-animated piece reveals the program's core message: "How far can a gallon of gas go? A lot farther than you think." "2012 Fueling Good Film" debuted March 8, 2012 on the Fueling Good website (www.fuelinggood.com).

"Fueling Good is about CITGO® doing good with what they make," remarks Darren Tibbits, associate creative director, Carmichael Lynch. "Our animated film illustrates the idea that little by little, acts of kindness can amount to so much more."
"2012 Fueling Good Film" centers on a momentous thread of events that are all dependent on one gallon of CITGO® gas donated to a documentary filmmaker. A businessman sees the film and is promptly inspired to donate coats to a shelter, one of which goes to an underprivileged father in need of a warm coat, seeking a job. He eventually finds work at a school where he meets a teacher and gets the education that enables him to teach his own child. The animated thread comes full-circle, revealing the homeless girl from the opening scene is the man's daughter, who is now a college graduate starting her own business.
To view, please go to: http://motion504.com/work/citgo/
Having previously created a graphic, type-driven film for last year's Fueling Good campaign, Tibbits explains how Carmichael Lynch aimed to evolve the narrative aesthetic for 2012: "We wanted the next iteration to be character-centric, with more depth, humanity and context. motion504's short animations exhibited texture, depth and just the right amount of movement and emotion that we wanted for our story, so we brought them into the fold to help bring our narrative to life."
"The idea was to let the script's visual cues tell as much of the story as possible," adds Schmitt, creative director, motion504. "It's an inspirational piece, and with the circular nature of the thread we were visualizing, it was fun exploring the storytelling through design, animation and illustration. We brought in elements such as movement in space, stylized parallax and well-defined characters who interact in clean, clear ways to keep them relevant to the central character, the homeless daughter; and, overall, conceptual with the project's message."
Schmitt, who illustrated the entire film, began the project working closely with Carmichael Lynch to develop style frames and boards based on the provided script. She then enlisted character animator Tom Lubanovic to help develop the character depth that the script called for; and finally, for the crucial phase of animation and compositing, she collaborated with motion504 Founder Andy Reynolds. Together, the duo explored ways to captivate the audience with each scene, while making the transitions invisible, and move the story as seamless as possible.
"Andy was the real key to pulling the story together and making it flow," remarks Schmitt. "The entire effort was all-around collaborative with a great character animator like Tom and creatives Darren and Phil at Carmichael, who both have a great sense of design and knew exactly what they're looking for. Everyone was very open to how I envisioned the project, giving me plenty of room to explore the look, feel and color palette from the very beginning."
Schmitt developed the desaturated color palette around CITGO's colors, subtly tying in reds and oranges for key props and wardrobe to underscore the brand's positive influence through their donation in the story. She brightened the palette with blues to elicit an emotional yet genuine feel-good tone and compliment the voiceover. She further developed the illustrative aesthetic with an emphasis on subtlety, choosing stylized representations of visual cues such as the heart on the woman's shirt and the homeless girl's pendant to connect the filmmaker's emotional involvement making the documentary. motion504's toolbox included After Effects, Cinema 4D, Illustrator and Photoshop.
"It's always great for us to do a project that's truly in Amy's wheelhouse," concludes Reynolds. "She's an exceptionally talented illustrator and fine artist, with a great design sense. Her emotive aesthetic and creative leadership really shined through to make this project a success."
Client: CITGO
Airdate: March 8, 2012
Title: 2012 Fueling Good Film
Agency: Carmichael Lynch
Executive Creative Director: Dave Damman
Associate Creative Director: Ellie Anderson
Writer, ACD: Darren Tibbits
Art Director: Phil Jones
Director of Integrated Production: Joe Grundhoefer
Content Producer: Tara Mulholland
Director of Project Management: Ellie Lundborg
Animation/Design Studio: motion504
Creative Director: Amy Schmitt
Illustrations: Amy Schmitt
Animator: Andy Reynolds
Character Animation: Tom Lubanovic
Calligraphy: Emily J. Snyder, Queen Quills Calligraphy
Executive Producer: Eric Mueller
Music house: Elias Arts
Recording/Mix studio: BWN
view more - Creative