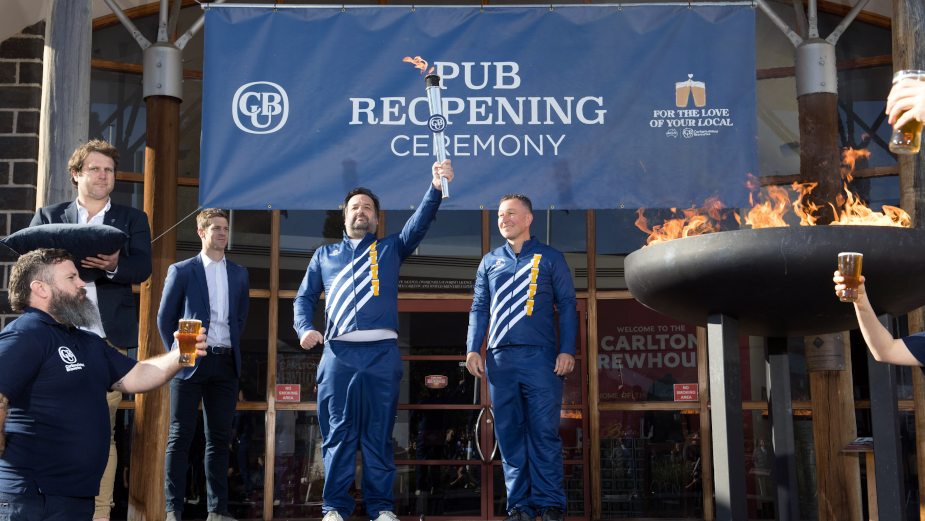 Carlton & United Breweries and Clemenger BBDO Melbourne have launched The Pub Reopening Ceremony, an epic pub crawl that is travelling to pubs across the country to help support them as they re-open.

The relay kicked off at Melbourne’s spiritual home of beer - the CUB Brewery in Abbotsford - where CEO Peter Filipovic, dressed in a beer-inspired tracksuit, lit the custom-made Tap Torch.

Filipovic officially passed the torch to comedian Mick Molloy who delivered it to Channel Seven’s The Front Bar, before the torch made its way to iconic Melbourne pub, The Espy, for the official first stop of the tour.

A team of official Tap Torch ambassadors are joining the campaign as it travels across the country throughout the three-week tour. Beer will flow at events held at every stop, encouraging Aussies to get down to support their local pub after months of severe restrictions that have left many pubs struggling to survive.

The initiative is an extension of CUB’s For The Love of Your Local campaign, which aims to raise $2 million for pubs across the country to aid in the recovery of Australia’s pub industry.

CUB CEO Peter Filipovic said that as restrictions continued to ease across the country, now more than ever we need to encourage Australians to head back to the pub to support their local.

“We’re thrilled that pubs are beginning to re-open across the country, and what better way to celebrate than with an official re-opening ceremony and a national pub crawl. We hope that this campaign helps shine a spotlight on the brilliant pubs across the country and encourages Australians to head back to their local and support the pubs that are at the heart of their communities.”

Clemenger BBDO Melbourne executive creative director, Evan Roberts, added: “This country has been through the full gamut of emotions over the last few months. But now it’s time to celebrate and to help out our locals by enjoying a fresh one straight from the tap.”

People can find more about The Pub Reopening Ceremony and support their local by visiting loveofyourlocal.com.au and nominating their favourite venue, then buying a pint of CUB beer using their credit card or PayPal account, with the funds going to the venue directly. CUB then matches that support, pint for pint in donated stock after the venue re-opens.