Santo spots calls for a Carlsberg with ‘That Premier Feeling’ 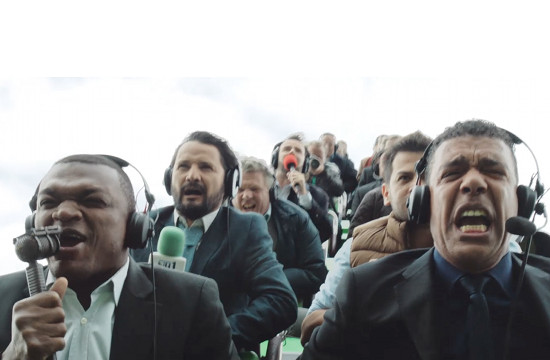 Carlsberg beer has launched a brand new global marketing campaign to sit alongside its three year deal with the Barclays Premier League – the most famous football league in the world, with a cumulative audience of 4.7 billion people.

Entitled ‘The Ride,’ the commercial focuses on the rollercoaster of emotions that everyone involved with the Premier League goes through during every game and season.

From fans to commentators, from players to linesman and from stewards to referees, this typically epic Carlsberg ad plants a stake in the ground positioning Carlsberg at the heart of those exceptional football moments.

Featuring legends including Robbie Fowler, Gareth Southgate, Jimmy Bullard, Marcel Desailly and Chris Kamara, ‘The Ride’ depicts hundreds of people on a rollercoaster symbolising these ups and downs, the tension and jubilation, the disbelief and jaw-dropping moments, the heartbreak and the glory, which everyone experiences in every match and every season.

Set to a dramatic soundtrack, the leading beer brand’s new commercial has defied expectations by creating a football commercial which doesn’t go near a football pitch.  Instead, the sound effects, the symbolism and the tension contribute to a commercial which is unmistakeably football related and will resonate strongly with fans.

Tom Moradpour, VP Carlsberg Brand, says: “The Barclays Premier League is the most emotionally charged football league on the planet.  We have used these emotions to create a commercial that is visually striking and celebrates why we think the Premier League is football that goes above expectations and that ‘Calls for a Carlsberg.’ ”

The strapline ‘That Premier Feeling…That Calls for a Carlsberg’ is the sign off for the ad which was created by Buenos Aires-based agency, Santo. Sebastian Wilhelm, Partner/ECD of Santo says: "It's very hard to come up with an idea that portrays the excitement of football fans and avoids falling into the same tired old clichés. So we didn't. Instead, we just changed the context."

It was directed by Juan Cabral and the production house was MJZ.

The global campaign is a fully integrated marketing campaign which will see the campaign brought to life through packaging, point of sale, print, outdoor advertising, digital and PR, across the world.

Some of the football’s most famous players, including Steven Gerrard, David Silva, Robin van Persie, Mesut Özil and Mechu play in the Barclays Premier League which is watched in 212 countries across the world.

The global campaign will be launched first in Denmark and Ireland, before being launched across the rest of the world in early 2014.

Carlsberg’s partnership with the Premier League is the latest football sponsorship for the internationally famous beer which has been associated with football since the 1970s.  In addition to Official Beer status of national football teams England and Ireland, Carlsberg also sponsors Liverpool FC and Arsenal FC at club level.

Carlsberg is also the longest-standing sponsor of the European Football Championships. The 2016 tournament will be Carlsberg’s eighth consecutive tournament since 1988.