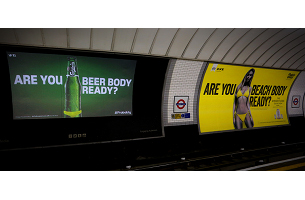 Beer brand Carlsberg has been quick off the mark in reacting to the debate in the recent Protein World controversy by hijacking tactical outdoor advertising sites at three major commuter spots across the London Underground network, asking consumers whether they’re ‘beer body ready’.

Proximity placements have been secured to target the Protein World outdoor advertising sites and demonstrate the brand’s tongue-in-cheek humour.

The cross-track projections are running at London Euston, Liverpool Street and Embankment stations from Thursday (April 30, 2015) to Sunday (May 3, 2015).

Dharmesh Rana, Senior Brand Manager at Carlsberg UK, said: “At Carlsberg, we’re not bothered about beer drinkers being beach body ready, our priority is ensuring they’re able to enjoy a nice, cold Carlsberg without worrying about their appearance.

“That’s why we’ve decided to remind the public at major commuter spots across London that it’s not about the way you look, or having probably the best body this summer, its about enjoying a Carlsberg whether you’re on the beach or at your local”

Protein World’s ‘beach body ready’ campaign, which has been rolled out across multiple sites across the London underground network, has provoked a significant backlash, with a petition to remove the adverts receiving over 60,000 signatures.

Members of the public wishing to find out the exact locations of the Carlsberg billboards can do so by visiting www.twitter.com/CarlsbergUK