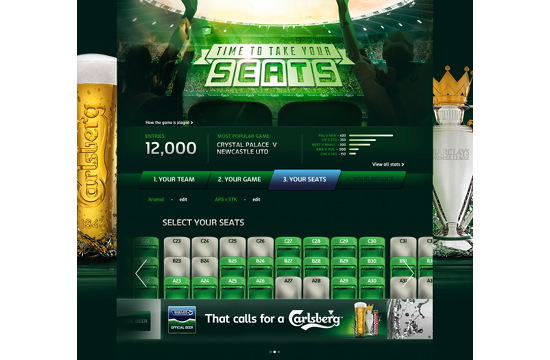 Carlsberg is supporting its first ever season as official beer of the Barclays Premier League with an innovative new site that brings football fans together and helps them win tickets to see their team play.

Carlsberg is inviting fans to back their team and choose matches they would like to win tickets to in real time via an engaging, cutting-edge website www.timetotakeyourseats.co.uk created by The Marketing Store.

The site, which is powered by live real-time data, allows users to monitor which games and teams are proving the most popular with fans. This live data feed helps them increase their chances of winning tickets.

There is also a share mechanic on the site, which allows users to share a link via any online platform. Fans who share a link with a friend will be rewarded with an additional entry to the prize draw.

The website is the key component of a campaign devised by The Marketing Store called ‘Time To Take Your Seats’. It invites fans, wherever they are and whoever they’re with to get the Carlsberg in and get ready for the match, offering tickets for every Barclays Premier League fixture over the 10-week campaign.

Carlsberg will run a weekly prize draw for each match and, in addition, will give away exclusive Carlsberg and Barclays Premier League merchandise.

The campaign will also be supported by LED perimeter advertising at selected matches.

“We are excited to be launching our first activity to celebrate the beginning of the new Barclays Premier League season and giving true football fans more opportunity to see the game they love live in an interactive way," said Dharmesh Rana, Senior Brand Manager Carlsberg UK.

Check the site out at: www.timetotakeyourseats.co.uk