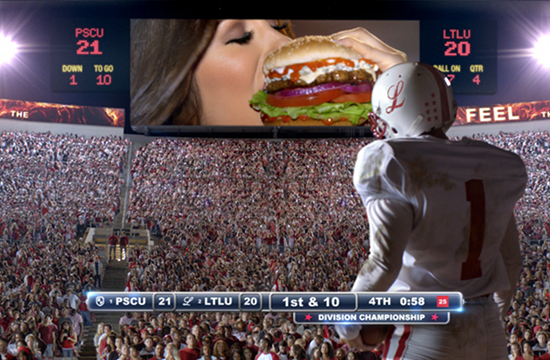 Brickyard VFX has consistently been delivering VFX for Carl’s Jr. spots for over ten years. Shot on location at a football stadium in Pasadena, the VFX work involved extensive crowd duplication in addition to artistic touches designed to enhance the fantasy sequence, artfully executed by Brickyard VFX Creative Director Patrick Poulatian. Since there were a limited number of extras available at the shoot, George Fitz composited countless sets of fans to fill the stadium with crowd tile elements that Head of CG David Blumenfeld carefully coordinated.

“As is the production mantra, it is always best to capture as much practically as possible. Although we were prepared to create a digital crowd to fill the stands as needed, in the end we were able to successfully maximize the use of human actors,” said Diana Young, Head of Production.

“A few hours before the shoot we blocked off ten by ten squares of seating within our shoot range, which spanned approximately 8000 stadium seats,” explained Blumenfeld. “By color coordinating blocks of seating with gaffer tape, we were able to quickly move the group of extras from point A to point B with enough variation to capture the required tiles and expedite the live action shoot. The production company really appreciated the planning and simplicity with which we got through what can tend to be a time consuming and tedious part of a shoot—and the tiles fit together and were composited seamlessly to fill the stadium."