Carl's Jr. Ditches Bikini Babes and Grows the F**k Up

Agency takes the brand back to its roots with the introduction of Carl Hardee Sr. 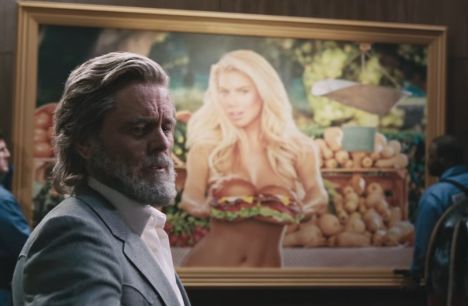 CKE Restaurants and 72andSunny Los Angeles have unveiled a new brand campaign, introducing Carl Hardee Sr., the fictional founder and amalgamation of Carl Karcher and Wilbur Hardee, who has returned to reclaim control of the company.

The extended-cut film, that will run online and on broadcast, begins at the company’s headquarters, where young Carl Junior, played by improv comedian Drew Tarver, has been running the family business, while kicking back in his office outfitted with a mechanical bull and hot tub. In an unexpected visit to headquarters, Carl Hardee Sr., who is played by Charles Esten, busts in Junior’s office, accompanied with a group of movers who immediately make changes, throwing out pictures of bikini-clad models from previous marketing campaigns. Carl Hardee Sr. explains that after founding and leading the company in the early days, he left the business to his young son, Carl Junior, who has had his own way and got sidetracked. He then walks through the history of the brand in a flashback sequence that features a younger Carl Hardee Sr., recounting how the brand pioneered the charbroiled burger, popularized the drive thru, and led the industry in innovative ingredients and flavor combinations. He reveals his plan to return to the company to its roots, and echoes its commitment to producing quality food. The film includes the brand’s new tagline, “Pioneers of the Great American Burger.”

Beyond broadcast, online and social media films, the brand campaign encompasses a complete redesign of the fast food chain’s packaging, in-store menus, employee uniforms and company logo, all of which was designed by 72andSunny.

“The best stories have a storyteller,” said Partner and Executive Creative Director Jason Norcross. “Creating both Carl Hardee Sr. and Carl Hardee Jr. gives us a fresh way to talk about the food, while helping the brand get credit for all the pioneering it does in the industry. People care about what’s in their food more than ever, and this campaign was all about getting back to talking about what makes Carl’s Jr. and Hardee’s stand out against its competition -- its history of innovation and the story behinds its quality products. We're really proud of our partnership with CKE, and it's exciting to work with a brand that's brave and collaborative. This is just the beginning and we're excited for what's to come.”

Keeping with its pioneer theme, Carl’s Jr., Hardee’s and 72andSunny also worked with emerging GIF artists and trap artist Oiki, (who entered the music scene in 2013 and has since played alongside Skrillex, Noisia, Alvin Risk, and others) to create a 30-second film that revealed its new tagline while showcasing the brand’s innovation achievements, including producing the first 100% Black Angus and grass-fed beef burger in the fast food industry, along with making its biscuits from scratch daily and hand-scooping the ice cream for its shakes. The spot also reveals Carl’s Jr. and Hardee’s will be adding all natural chicken to its menu items.