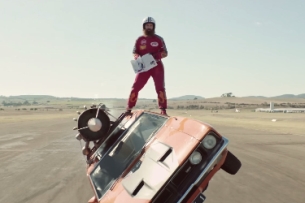 Captain Risky is back and he’s riskier than ever in this new daredevil spot for Budget Direct Car & Home Insurance, created by 303Lowe Sydney.

The ad is the next in the “We don’t insure Captain Risky, to keep prices low” campaign which launched in January this year.

Richard Morgan, ECD, 303Lowe, said, “Budget Direct have just won Money Magazine’s Insurer of the Year 2015. That’s pretty big news. But Captain Risky has created a stunt that he thinks is even bigger and better. See him ride a wave of danger into glory.”

Jonathan Kerr, Director, Marketing & Digital, Budget Direct, says, “Budget Direct being named Money magazine’s Insurer of the Year 2015 is a huge endorsement of the value that we deliver to our customers. I can see why Captain Risky has thrown down the gauntlet in his latest stunt.”

The commercial was shot on location in Goulburn, NSW by Hamish Rothwell through GoodOil Films.