Created by DDB North America and directed by duo Hoffman/Metoyer of MJZ, the spots capture people in honest, true-to-life moments 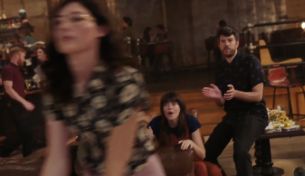 Capital One has revamped their Savor card and now offers customers 4% cash back on dining and entertainment. To support the relaunch of the card and promote it’s benefits, Capital One is introducing a new advertising campaign called “Go Out. Cash In.” which features real families, real couples, real groups of friends, doing exactly what the card rewards: having fun and making memories. Savor is an incredibly seamless and incredibly rewarding part of the experiences they seek out.

To tap into that emotion, Capital One partnered with DDB Chicago to create an integrated campaign, connecting the Savor card beyond the act of just paying, to the act of enjoying a night out with those you love. All the rowdy, messy, perfectly imperfect moments we’ve all had, punctuated by Savor, and what it adds to the experience.

The creative shows those authentic groups of people (the entire cast features real life couples, families and groups of friends), exchanging the looks, laughs and knowing nods that only true friends and family can – all while using the Savor card to be rewarded.

Capital One’s “Go Out. Cash In.” campaign debuts during the 2018 Emmy Awards on Monday, 9/17, where Capital One is a title sponsor. Click below to watch:

Directed by director duo Hoffman/Metoyer of MJZ, the new spots capture people in honest, true-to-life moments of an unforgettable day or night out. The film is packed with energy, set to three iconic songs, Prince’s Let’s Go Crazy, Michael Jackson’s Don’t Stop Til You Get Enough and Whitney Houston’s I Wanna Dance with Somebody.

This is Capital One’s most integrated campaign to date. New print, digital, social media and radio will also run alongside video.