The interactive video is targeted at the game’s 3.7 million Facebook fans 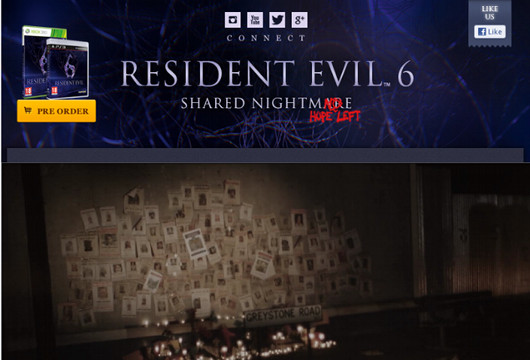 Leading videogames developer and publisher, Capcom today revealed 'Shared Nightmare', an interactive Facebook video to promote the release of Resident Evil 6 to the game’s 3.7 million Facebook fans.
The interactive video visualizes a person’s last moments alive amongst the devastation of the game’s global ‘C-Virus’, personalised with the user’s Facebook friends and with an integral functionality to send them a final message mid-video. The video is housed in a Facebook application and pulls in information from the user’s profile to create an experience truly unique to them.

Digital Marketing and Communications agency Crush delivered this activation as part of its global digital campaign for Resident Evil™ 6. The campaign was designed to run through a summer of 'No Hope Left'; exploring the fans’ emotions towards how they'd spend their last moments alive. The theme was planted into a social environment, which inspired conversation and tied in with the game's narrative.
The digital campaign kicked off at the start of summer with a 'C-Virus World Map' - an interactive Tweet map where users warned their friends via Twitter of the infection spreading, an activity which itself virtually 'infected' them and any Tweets they sent through it. In a few weeks 100,000 visitors browsed the virtual map.
Following the C-Virus map, the next deployment 'Last Goodbye' was unleashed.
The ‘Last Goodbye’ social site allowed users to send their final farewells to friends and loved ones via Facebook. Fans were able to make video submissions via YouTube, audio via Soundcloud or plain text. Facebook integration socialised the activity with a 'social browsing' function allowing users to seamlessly share their consumption and submissions through their Facebook Timelines.
After the launch of 'Last Goodbye', Crush revealed an additional segment of this activation - 'Last Gift', a competition, which asked fans to request their final dream gift, some of which are being granted by Capcom. Fans are able to submit their own wish, or one for a Facebook friend. The final stage of this 'Last Trio' is 'Last Song' - where fans can leave their final song sourced from Toma.hk – a new global music-sourcing tool.
‘Shared Nightmare’ launches today, and is the penultimate activation leading up to the game’s release on October 2nd.
Crush has been responsible for the brand's complete social media repertoire, since November 2011 and throughout the year delivered a content programme which has seen Resident Evil™ top its title competitors in the social space, as well as help Capcom move in to the top 100 in Dachi's Social Business Index. The agency has deployed additional Facebook applications around specific requirements and will soon be launching a dedicated Resident Evil™ 6 responsive web destination.
Angelique Schierz-Crusius, Head of Digital Marketing at Capcom said: “At Capcom we are always looking for new and exciting ways to connect with our audiences. Capcom and Crush have a great synergy and we hope to have created a digital campaign that grows excitement amongst the core Resident Evil™ fanbase about the forthcoming title as well as reaching out to and engaging with new audiences.”
"Resident Evil™ 6 has been a fantastic campaign to see through this year. I believe we've captured the imagination of fans across the world though multiple device responsive, localised and narrative driven activations which had social at the heart. Importantly, fans have been given something they can be involved in, whether they choose to take part or just browse. We owe it to the 15 year heritage of Resident Evil to invest and deliver above just the 'game experience', and extend the narrative in to new, exciting digital dimensions for fans to enjoy," said Jez Hughes, Account Director at Crush.
As the Resident Evil brand celebrates its 15th birthday this year, Resident Evil 6 is set to be the franchise’s most successful title to date.