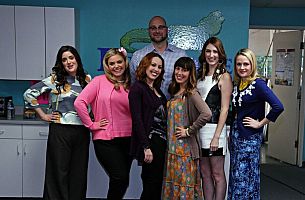 Over the past 15 years, Matt Miller has built a very successful career as a stage director in Chicago.  His critically acclaimed production of The Seafarer for Seanachai Theatre received four stars from the Chicago Tribune, two extensions, and a Jeff Award for Best Ensemble. He has also worked with Steppenwolf, Second City, Mary Arrchie, Lifeline Theatre and Barrel of Monkeys. In addition to directing, Miller spent five years as a casting director for Paskal Rudnicke Casting. In 2012, drawing on those combined experiences, Miller teamed with the super talented sketch group The Katydids and commercial production company Cap Gun Collective to create and produce the original web series Teachers.

The original 'Teachers Web Series' was produced and promoted through Cap Gun TV, Cap Gun’s hybrid production studio that develops, produces, and markets original content for multiple platforms.  Soon after launching on YouTube, it gained wide attention on The Onion’s digital platform. In 2014, it received a TV pilot order by TV Land for production, and then eventually a ten episode series order. Along with Alison Brie, Ian Roberts, Jay Martel, Cap Gun TV and the Katydids, Miller now serves as an executive producer on the new TV series, which premiered on Wednesday January 13th.

2013 was also the year Miller joined Cap Gun’s commercial roster. He has directed commercials for clients including Hyundai, Intel, Sprint, AT&T, The Hartford and Trulia, and earned Gold and Silver National ADDY Awards. With Teachers recently renewed for a twenty episode second season and a new web series ready to debut soon, Miller shared some insights about directing, developing original content and some of his other passions.

What’s the story behind the development of the Teachers web series?

MM> I knew several of the Katydids from my time as a casting director at PR Casting. They had a tentative pilot deal for a script they had written and they approached me about directing it. We met and talked about the project and ultimately it wasn't a match, but I came away from that meeting knowing I wanted to do something with that group eventually; they were just so smart and so fun.

A few months later I happened upon a few surveys about teachers; polls that cited teaching as one of the most adulterous and most gossip-ridden professions and yet also one of the most admired professions. I thought that was an interesting juxtaposition and that led to the concept for Teachers. The Katydids loved the idea and we began working on characters and scripts in early 2012.

Fast forward a year, the web series is a hit and we’re suddenly meeting with a few different creatives and producers to talk about making Teachers as a TV show. A lot of the people we talked with early on were intent on telling us right out of the gate “this is what needs to change” or “I would take it this direction” and that was a bit confounding as the things that had gotten us there—the characters and the overall concept—were actually working pretty well we thought. Fortunately when we started talking with TV Land there was just a palpable enthusiasm for the project from the first conversation and much more of a “how can we help you grow this?” kind of dialogue with the Katys. They’ve been a great champion for the project and incredibly supportive at every step.

When you think about directing the web series, what was your biggest challenge?

MM>  Definitely coming up to speed with the technical aspects of filmmaking. Teachers was my first real on-camera directing project. It was my first time running a set as a director, first time working with a producer and a DP. I had certainly been around film and commercial sets before, but it's a very different experience when everyone is looking to you as the guy with the answers. Very grateful I had experienced production folks like PJ Fishwick, Ken Yoder, Sara Martin, and Darryl Miller kindly showing me the ropes on that project.

After directing for the stage, what was different about directing on-camera for the web series?

MM> I knew going in that the rehearsal process doesn't exist in the same way for a web/film project as it does for a play. Still, that truth has a way of smacking you in the head once you're on set. Time is of the essence and you have to problem solve and communicate calmly and quickly. When you're directing a play you're trying to build something that can weather four to five performances a week over the course of a multi-week run. You have weeks of rehearsal. You can think about the problems for a bit longer before you implement solutions. For an on-camera project, the paradigm is very different; you're trying to catch lightning in a bottle and you're on the clock. It's a very different kind of stress to metabolise. Fortunately, I learned that I'm pretty good at that aspect of the job. I dig it.

Can you describe the transition into commercial directing?

MM> You know that moment in the Karate Kid where Mr. Miyagi has had Daniel doing all these seemingly menial chores like painting the fence and waxing his car and then suddenly he comes at him and Daniel finds he's able to fight back and you can see Daniel thinking "Oh sh*t, I know karate!"? Well, it was kind of like that. I had worked in commercial casting for many years so I knew what to do in session, how to talk like a director, how to parse a commercial script. I had been directing plays for years so I knew the process; I knew how to talk to actors. I had friends in the advertising world so I knew a bit about that side of the equation, too. It ended up being a nice and natural transition. I had all the skills going, I just didn't quite know that yet.

I also give a lot of credit to Matt Abramson, the executive producer at Cap Gun who did a great job of getting me booked on projects in my first year that played to my strengths and allowed me to work on my weaknesses without much fear of failure.

You have a new web series?

MM> Yes! The new web series coming out very soon is called Sickos, co-produced by Cap Gun and created by some good friends Laura Grey, Laura McKenzie, and MaryWinn Heider. It's set in a medical simulation center, the kind of place med students go to learn how to work with patients, a very weird world full of actors and artists pretending to be sick for a living. Jordan Klepper from The Daily Show did an episode for us. Very excited to share it soon.

What are you most excited about for 2016?

MM> I should probably say some stuff about the show or continued commercial work, but really it’s baseball. Both my teams – the Cubs and the Indians – could be very, very good this year.