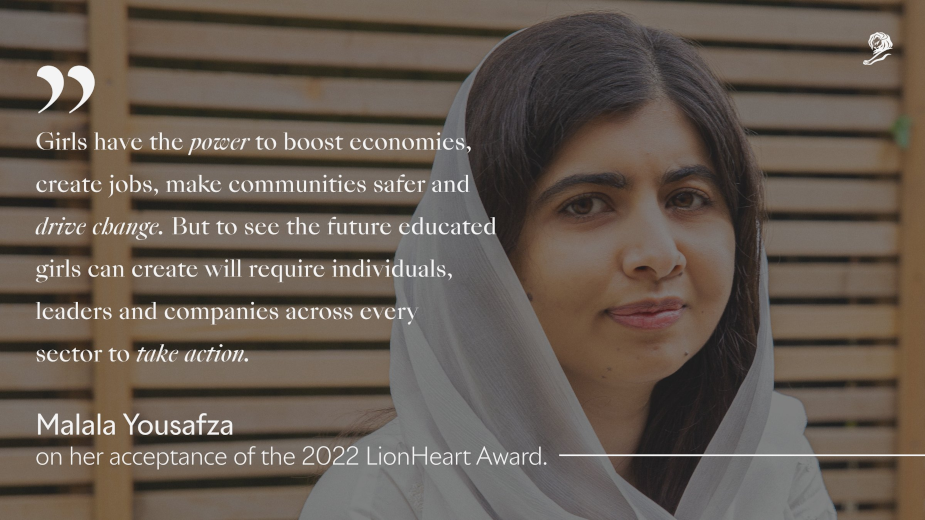 The Cannes Lions International Festival of Creativity has announced that it will honour girls’ education activist and Nobel Peace Prize laureate, Malala Yousafzai, with the 2022 Cannes LionHeart; the award is given to a person who has harnessed their position to make a significant and positive difference to the world around us.

Born in Pakistan, Malala’s life changed dramatically when the Taliban took control of the town where she lived and banned girls from attending school. After speaking out publicly on behalf of girls and their right to learn, she survived an attempt on her life by the Pakistan Taliban. In 2014, Malala and her father Ziauddin co-founded Malala Fund, a nonprofit dedicated to giving every girl an opportunity to achieve a future she chooses.

Commenting on the award, Philip Thomas, chairman, LIONS, said: “Malala’s strength and courage is an inspiration. Her creative leadership of Malala Fund has successfully established a charity that is creating positive change for many across the globe. The LionHeart is awarded to those that are making a genuine difference to the world and to whom we offer the platform of Cannes Lions to appeal to the world’s communicators to help their cause. We are humbled to be presenting her with this award in June, and we know that the creative community will respond with their customary generosity and creativity.”

On her acceptance of the award, Malala Yousafzai, Co-founder of Malala Fund said: “Girls have the power to boost economies, create jobs, make communities safer and drive change. But to see the future educated girls can create will require individuals, leaders and companies across every sector to take action. I am honoured to accept this year’s LionHeart Award and look forward to connecting with the creatives at Cannes Lions around how companies can lend their platforms, expertise and resources to accelerate progress for young women, girls and our world.”

With more than 130 million girls out of school, Malala’s mission is to ensure all girls receive 12 years of free, safe, quality education. Malala Fund focuses on three core areas to propel this fight: investing in local education activists; advocating for policies that will help more girls learn; and amplifying girls’ voices. Malala Fund works in regions where the most girls miss out on secondary education, including Afghanistan, Bangladesh, Brazil, India, Lebanon, Nigeria, Pakistan and Tanzania.

The Cannes LionHeart seminar, with Malala Yousafzai, will take place in the Lumiere Theatre at 3pm on Thursday 23rd June. Malala will accept the LionHeart Award that evening at the Awards Show. Further information about the Festival, which runs from 20-24th June can be found here.