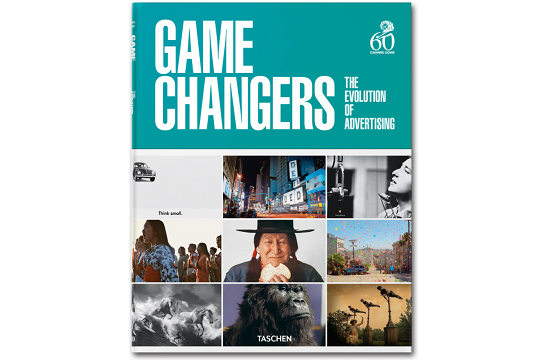 Celebrating its 60th year, the Cannes Lions International Festival of Creativity is set to commemorate its anniversary with the launch of Game Changers; an exhibition and accompanying book that celebrate six decades of campaigns that have changed the landscape of the advertising industry forever.

On display in a designated area of the Palais des Festivals, the exhibition will run alongside the Cannes Lions Festival welcoming both delegates and the general public from 15-22 June. From Volkswagen’s ‘Think Small’ to the Nike Fuelband via Levi’s ‘Launderette’, it looks at the ‘firsts’ from the creative companies that have been transforming brands for 60 years. After the Festival this exhibition is set to travel to different venues around the world.

The book, Game Changers: The Evolution of Advertising, published by Taschen for Cannes Lions, features more than 150 of the most outstanding campaigns to have been produced since the 1950s, and discusses the context in which they were launched. It also features eye witness accounts from key industry players David Bailey, Lord Tim Bell, Lee Clow, Brian DiLorenzo, David Droga, Jeff Goodby, Paula Green, Bob Greenberg, Sir John Hegarty, Valdean Klump, Aaron Koblin, Piyush Pandey, Fernanda Romano, with an introduction by Arianna Huffington.

“There is no better way to celebrate Cannes Lions’ birthday,” says Philip Thomas, CEO of Lions Festivals, “Pulling together decades’ worth of ground-breaking campaigns reminds us why this industry is so special. Its relentless creativity, passion and its ability to innovate and reinvent shines through in Game Changers. It is both a fascinating and educational walk-through of defining industry moments and the world’s greatest creative work.”

The Game Changers: The Evolution of Advertising book will be exclusively available for sale at the exhibition in Cannes before going on general release later this summer through major bookstores and online. More information is available at www.gamechangersatcannes.com.

Other 60th anniversary celebrations taking place at the Festival include an exhibition of Cannes Lions memorabilia and a drinks reception hosted by the City of Cannes at the Cannes Connect Bar on Friday 21 June. The 2013 edition of the International Festival of Creativity takes place in Cannes, France, from 16-22 June.