Cannes Contenders: Publicis Worldwide’s 10 Prospects to Look Out For 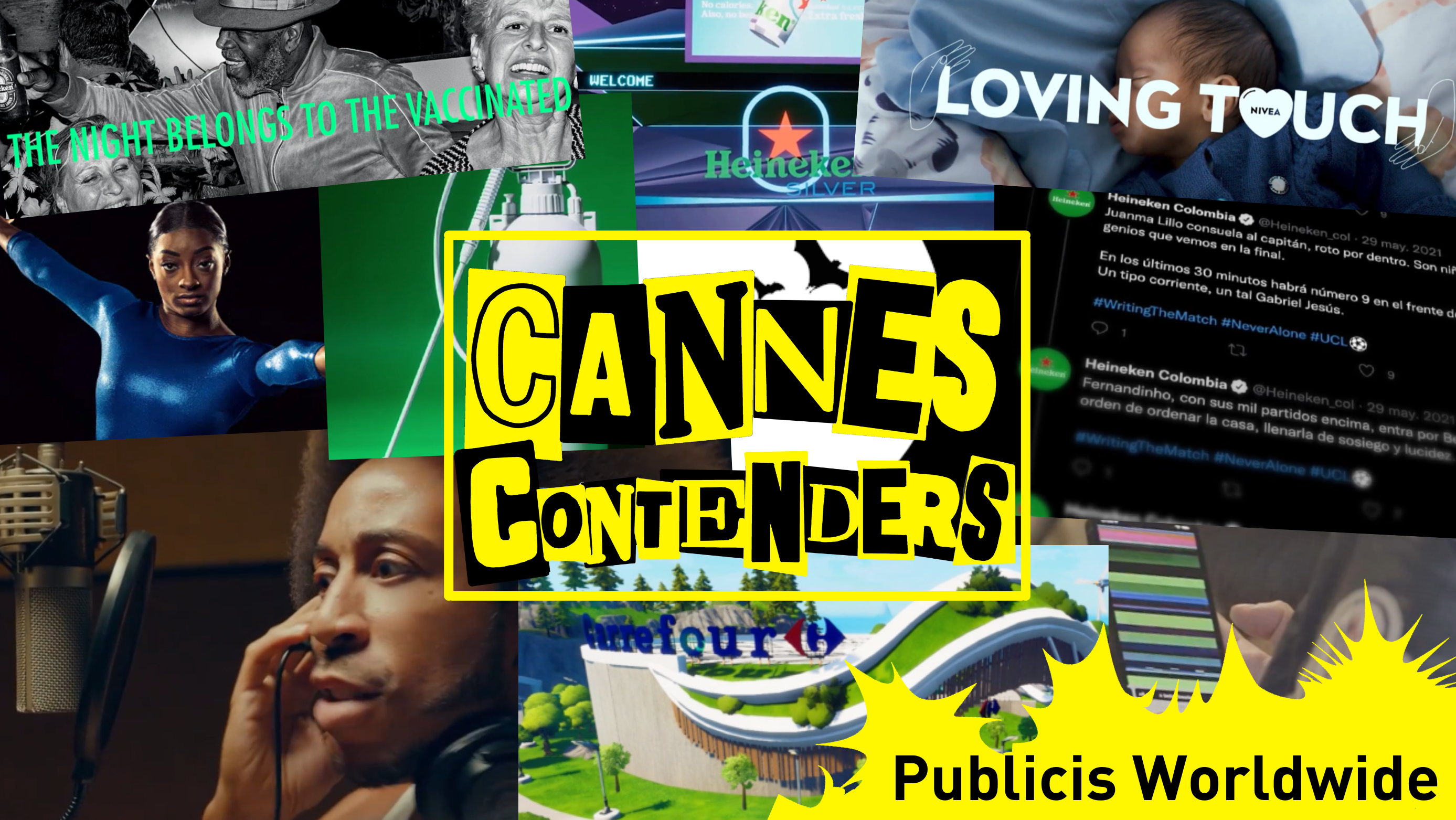 Throughout the last year, Publicis Worldwide agencies have created a variety of innovative, entertaining and poignant campaigns - all with the hopes of covering themselves in glory this Cannes season. With the first in-person Cannes Lions for three years almost at our doorstep, we’ve asked senior creatives from the network to share their favourite projects from their Publicis Worldwide colleagues – and to show us what to expect from their agencies at this year’s festival.
LBB has asked every major agency network to share its best work from the past year ahead of Cannes Lions 2022. Check out all the lists published so far here.

The Night is Young – Heineken

Andrey Tyukavkin, global ECD at LePub: “As vaccination numbers grew in 2021 and promised the return of nightlife, a deep dive in data showed that only people 40+ were taking vaccinations seriously, while among gen z and gen y the numbers were still close to zero after a few months. We had a clear POV but had to do it the Heineken way. Finding a witty and surreal idea and execution for such a serious problem was our main challenge. But it was really the clients' bravery that propelled the project forward. Bravery for taking a stand on a topic like this but also for believing in going for such a lateral and bold approach.”
Idea Creation: Publicis Italy/Le Pub
Client/Brand: Heineken
Production Company: Good People
Sound Production: Sizzer Amsterdam

Milos Obradovic, global ECD at LePub: “It is extremely exciting that so many brands saw the potential of the metaverse as the next freshest thing. Too bad, our product – beer – makes no sense in the metaverse, like, at all. But who said we couldn’t still have a campaign in there? So we launched a virtual beer with a single mission in mind: to show that while metaverse is great for many things, having a cold one is not one of them. The launch of a useless virtual product is a way for us to launch a real one – extra fresh Heineken Silver, better enjoyed for real.”
Idea Creation: Publicis Italy/Le Pub
Client/Brand: Heineken
Media Company: Dentsu RedStar
Production Company: Isobar
PR Company: Edelman

Erica Roberts, CCO at Publicis New York: “We had been on the hunt for another cultural debate to tap into since our success with Jif vs. Gif.  And when social listening uncovered the conversation around mumble rap and how the old school lyrical rappers were saying the new school’s melodic style sounded like they were rapping with a “mouthful of peanut butter”, the team went nuts. From there, the stars just seemed to align every step of the way. First, it was all about enlisting the perfect lyrical rapper, and we landed Ludacris. Then Grammy-winning music video director Dave Meyers came on board. And every piece of the campaign after that fell perfectly into place. We’re all over the moon about how well consumers – and now the industry – is receiving this campaign!”
Idea Creation: PSOne New York
Client/Brand: JM Smucker
Production Company: Radical Media
VFX/Post Production Company: JAMM
Animation Company: Motif Studios
Colourist Company: Company 3
Audio Record, Sound Design & Mix Company:  Super Exploder

Marco Venturelli, president overseeing creativity at Publicis Conseil: “Turns out, the best way to reach gamers is to give them a game. Knowing gamers have been targeted for too long by fast-food brands, Carrefour – with its commitment to better eating – did just that. Influential gamers streamed our game where players healed only by eating healthily from the store's fruit and veg aisle. Gamers embraced our message whilst having a good time.”
Idea Creation: Publicis Conseil
Client/Brand: Carrefour
Influence Company: CTZAR

Youri Guerassimov & Gaëtan du Peloux, ECDs at Marcel Agency, with Clément Sechet, creative director at Marcel Agency: “Back Market sells high tech but with low impact. It's called refurbished. Thanks to ADEME (French governmental organisation), buying refurbished tech saves 91% of CO2, 68,800 litres of water, and 129 grams of rare metals… versus buying new. To really challenge people about buying a new device versus a refurbished one, we decided to go further than a traditional campaign by creating a new medium: our competitors display models in Apple Stores in Paris, Berlin and London.
“On Earth Day, April 22nd 2022, we decided to convince people to switch to refurbished right before they bought a new device. Like really, right before, thanks to AirDrop. We designed messages to convince customers in the ‘temple of new’ about the huge difference between refurbished and new, which then redirected them to the Back Market website to buy the same model but way more sustainable.
“On one of the agency’s walls, there is this quote by Marcel Bleustein-Blanchet, [Publicis Groupe founder] ‘At some point, you have to stop being reasonable and dare.’ As we believe this campaign fits perfectly with Marcel’s agency’s DNA, we are particularly excited to compete in the most prestigious creative festival in our industry and its juries.”
Idea Creation: Marcel Paris
Client/Brand: Back Market

Joanna Monteiro, CCO at Publicis Toronto: “It’s a simple, effective and proprietary idea because only Jeep vehicles come with a grill that looks like a barcode. So why not turn it into a real barcode? That’s what we did. We created a great experience for our younger target market that converts a moment of interest into an opportunity that can end in a dealership. We wanted a perfect experience and we got it. With Snapchat, users don’t have to download any app, just open the camera, point at the barcode and start the Jeep journey.”
Idea Creation: Publicis Toronto
Client/Brand: Stellantis Canada
Production Company: The Pub Toronto

Diego Wallach, CCO at Publicis Mexico: “In a world where sports brands were building a toxic culture of winning at all costs, we love the idea of challenging the status quo within the category, by partnering with some big names in sports to prove to a new generation of athletes that the secret behind the win isn’t in the push. It’s in the pause.”
Idea Creation: Publicis Mexico/Publicis Italy
Client/Brand: The Coca-Cola Company
Production Company: Stink Films

Camilo Carvajal, CCO at Publicis Colombia: “Heineken and the Champions League are among the best marriages in the world, so it was really important for us to keep the relevance of this sponsorship according to the brand essence. And that was what made this idea. It took the UCL final to the fans during the pandemic lockdowns in a way that only Heineken could do it – turning a match into a live-written novel.”
Idea Creation: Publicis Colombia
Client/Brand: Central Cervecera de Colombia
Production Company: The Pub
Media Company: Spark
Sound Production: Laika

Axel Grimald, global ECD at Publicis One Touch: “Nothing can substitute the human touch. But with NIVEA’s Loving Touch prototype, we’ve mimicked a parent’s touch to bring comfort to preemies inside the incubators in ICUs. Having an idea that makes other people’s lives better or even hard situations a little less hard is not only an excellent creative outcome but also human. Thanks to the team’s one-year dedication and NIVEA, which believes in the power of creativity and makes ideas such as this happen.”

Ger Roe, board creative director at Publicis Dublin: “In a time when most brands are concerned about the impact of covid on their own business, Heineken was more concerned about how it would affect the bar business and the planet. Where many brands would have dumped the unused beer. Heineken found a way to serve the planet.”
Idea Creation: Publicis Dublin
Client/Brand: Heineken
Production Company: D12FILMS
Sound Production: Folding Waves

Ajay Thrivikraman, CCO at Publicis Groupe, Southeast Asia and Mihir Dhairyawan, creative director at Publicis Singapore: “The Vicks #TouchOfCare campaign has always been about shining light on the marginalised. Giving them a voice. Little did we know that doctors would be the ones in dire need of the ‘touch of care’. The pandemic changed our lives in many ways, especially for the healthcare professionals, who suddenly found themselves on the frontlines of a war. This is a pandemic story that is inspirational for a post-pandemic world.”
Idea Creation: Publicis Groupe Southeast Asia
Client: Procter & Gamble
Production Company: Memesys Studios
Check out all the other agency networks' Cannes Contenders lists published so far here.
view more - Creative 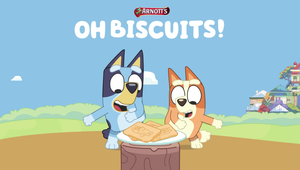 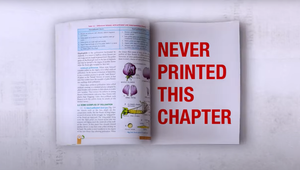 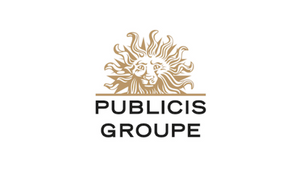 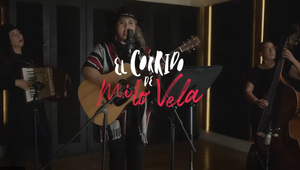