Created by BETC Paris, the 'It’s Going to Hurt' campaign also has a dedicated website that allows supporters to sting a virtual doll of the rival team 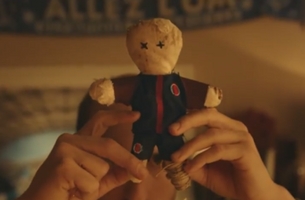 This year again, the Classico (Olympique de Marseille VS Paris Saint Germain) will be broadcast live and exclusively on Canal+ on Sunday, February 25th at 9pm.
BETC and Canal+ suggest an unexpected explanation for all those incomprehensible missed moves during the football games: what if it was all due to the supporters’ passion?
This original and off-the-wall film shows a PSG and an OM supporter in front of their TV-screens, taking turns in trying to influence the game by sticking pins in voodoo dolls.
A dedicated website launched at the same time lets supporters join the experience and sting a virtual doll of the rival team. Unsurprisingly, the football mad and feisty French are going for it and before the actual game there is now a competition going on online, competing which doll gets pinned the most.
The dolls have already been pinned more than 3 million times.
view more - Creative