The team join for representation in the US & UK 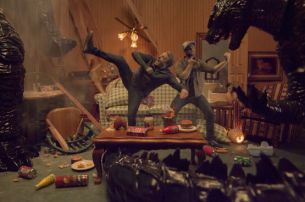 Rattling Stick has announced the signing of Canadian duo, Aircastle, for representation in the US & UK. Click here to view their reel.

Rattling Stick co-founder & award-winning director, Ringan Ledwidge says, “Undeniable talent aside, once Aircastle told us they decided to join Rattling Stick because they found a picture on our website of Johnnie (Frankel) dry-humping a stuffed wolf,  we decided we had to sign! Like-mindedness in its pure form. And, yeah, there’s the talent part.”

Breaking into the commercial world with Catvertising, Aircastle has quickly carved out a distinctive voice in comedy. Since meeting in York University’s Film Production program, Will and Jamie’s creative partnership has already outlasted most marriages. Along the way they’ve accumulated numerous accolades at Cannes, the One Show Film Festival, the Webby Awards, the Clios, and the D&AD’s to name a few. The duo also shares a couple’s phone plan, and when necessary live in confined spaces together.

Joe Biggins, Executive Producer of Rattling Stick says, “Ditto what Ringan said, but I always thought it was a Siberian Husky. Really though, Rattling Stick couldn’t be luckier to have found two guys who have invited us to live with them in Canada. We are very proud to add Aircastle to the roster, Will and Jamie are great guys who share the common goal of making great work while having a good time along the way.”

The guys made waves with their first collaboration by refusing to shoot their thesis film in the dead of Canadian winter. Instead they set out in a 1993 Buick LeSabre and headed south, armed with some Super 16mm film and a comedy script. Thousands of miles later, they stumbled upon the sleepy community of Geneva in central Florida. This community became not only the setting, but a character in the film which was a hit on the festival circuit, screening at major festivals around the world and being recognised as one of the Toronto International Film Festival’s Top Ten.

Years after their road trip to Florida Jamie and Will are still blown away every time they step on set, never forgetting what a privilege it is to be able to do what you love.

“Like any great family, Rattling Stick is made up of an eclectic, kindhearted bunch of weirdos who think crazy is a compliment,” Aircastle confesses, “It’s the kind of home where strangeness is celebrated and family photos are meant to be awkward — and we fit right in! From the moment we stepped into their Santa Monica offices we knew we had found our US home with Rattling Stick, a creative force of a company made up of people who love to make beautiful things and have a laugh along the way. We couldn’t be more excited about being adopted into this delightful group of misfits.”