Can You See The Signs? BBDO New York's Four In One Ad For Autism Speaks 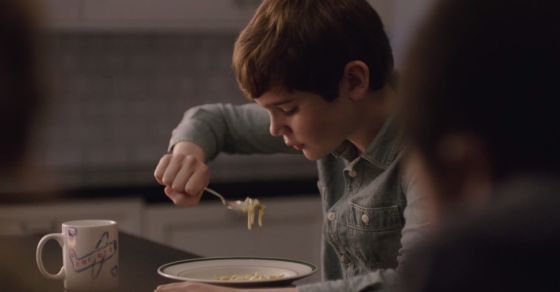 BBDO New York has brought together three of its clients to help deliver a one-of-a-kind, onetime :60 commercial message designed to help raise awareness of autism and encourage parents to look for early signs. The “ad” is timed to debut at the end of April, which is Autism Awareness Month. The message, “Early diagnosis can make a lifetime of difference.”

But what makes this effort unprecedented is that the message is actually made up of four, stand-alone short commercials woven together in one seamless story that features the same family as they take a journey through their child’s upbringing, having coped successfully with the challenges of autism. It begins with a family visit to a pediatrician, and then is followed by short commercials for clients like Campbell Soup Company and AT&T Wireless. As viewers watch the commercials, they will notice changes in the four-to-six-year span between each advertiser’s spot. The same parents appear in each commercial as the young boy grows up, interacting with his family in everyday situations involving these clients’ products. The last story shows the heroic young man in graduation gear as copy states, “You just saw how early diagnosis can make a lifetime of difference. Watch again or learn the signs at www.autismspeaks.org/signs.”

“Autism affects around one in 68 children in the U.S. However, research reveals that with early diagnosis and early intervention, behavioral therapies can improve outcomes,” said Andrew Robertson, President & CEO, BBDO Worldwide and a member of the Board of Autism Speaks. Added Greg Hahn, Chief Creative Officer, BBDO New York, “With April being Autism Awareness month, we were looking for a way to dramatically tell this story. We found it through a partnership with our brilliant clients who eagerly embraced the convention-breaking, innovative spirit of the idea. The result is an ad that’s like the Super Friends of public education messages.”

“Campbell’s foods and beverages have played a role in life’s moments for generations and we applaud our long-time partner BBDO for their efforts in this campaign,” said Yin Rani, Vice President-Integrated Marketing at Campbell Soup Company. “We value the close relationship we have built with families over our 145 year history.”

Added Esther Lee, SVP Brand Marketing & Advertising at AT&T, "As a company and brand, AT&T believes that you have to rethink possible to drive human progress. That's what early diagnosis represents for children with autism.”

The ad is scheduled to air one time on TV on Monday, April 28 on the CNN program New Day. It will encourage viewers to watch again and go to the website to learn the signs of autism, because early intervention can make a “Lifetime of Difference.” Thereafter, the message will continue to live online on YouTube. Additional behind-the-scenes video will also be available for viewing. A digital extension is expected to run online courtesy of Undertone.

“The importance of recognizing autism’s earliest signs is a critical message – one that CNN is honored to help deliver to our global television audiences,” said Jeff Zucker, president of CNN Worldwide. “This is an issue that needs awareness, and we’re pleased to have the platform to do just that.”

“This message has been months in the making and is a new approach that we’ve never seen before,” said Bob Wright, co-founder of Autism Speaks, the world’s leading autism science and advocacy organization. “It challenges the conventions of how people consume media today. We thank BBDO for having uncovered such an innovative way to share the vital importance of early diagnosis.”