Can You Play Cupid in Geox's Interactive Weather Changing Film? 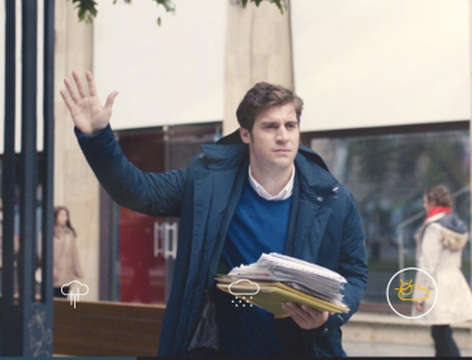 To launch GEOX’s newest collection of Amphibiox all-weather footwear, SMFB and Stinkdigital partnered to create ‘You Control The Weather’, an interactive film where the user influences the outcome of the story by taking control of the weather elements.

Set in urban surroundings, the film is a love story between two strangers who face extreme weather changes that impact the course of their day. Choosing between sun, rain or snow, the user is prompted by the story narrator to set the weather of each scene in the hope to orchestrate a serendipitous meeting between the two potential lovers.

Each scene and weather setting impacts the footwear worn by the individuals as they take their journey across the city. With the integration of a hand crafted 3D camera mapping technique, the user can zoom in on frozen moments to explore the footwear in 360°. As the camera revolves around, the user can quickly navigate through different conditions to see how each shoe’s unique performance is optimised regardless of the weather. All footwear featured in the film can be purchased at any point in the story with a click through to the online store.

The responsive site allows users to experience the interactive film across different platforms and is specifically optimised for touch screen devices. The film was directed by Jonathan Entwistle.

This launch follows ‘The Rainiest Place on Earth’, an interactive documentary following four volunteers who test the GEOX Amphibiox footwear in Cherrapunjee, a village in northern India with the highest annual rainfall on the planet. Awarded a Gold Cyber Cannes Lion in 2013.