Can You Handle Our Spooky Halloween Showcase? 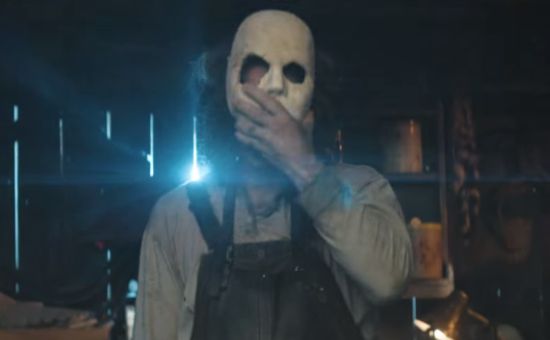 Halloween may not yet be an advertising fiesta on the scale of Super Bowl or Christmas, but it’s definitely more fun. No need for macho blokiness or schmaltzy sentiment – it’s pure silliness and scares. LBB’s Laura Swinton runs down some of the stand out spots from this year.

Who needs pumpkins when you can craft your Halloween lanterns from empty pizza boxes? CP+B have come up with a clever use for last night’s box in their ‘Shadows from Beyond the Box’ social media campaign. Find the patterns on the Domino’s Pizza Pinterest and Facebook platforms.

Prankvertising is just like a zombie in that it refuses to die. It’s not going anywhere and this year Ford are joining in on the act with a haunted car wash that sees unsuspecting test drivers thrust into a vortex of demons. Just saying, if anyone tried to pull this shit on me it would be headshots all round.

Speaking of pranks, Thinkmodo, the team behind the Demon Baby and Carrie Coffee Shop stunts, is back with a new trick for movie Ouija. And it’s eye-popping. Literally.

Monsters, they’re much more scared of you than you are of them. UK telecom provider Giffgaff has developed a bit of a rep for gruesome commercials and this Halloween they’re rocking a monstrous chase scene from Fallon and Riff Raff Films.

Axe-happy maniac Jack Torrance would make short work smashing up an Ikea showroom, so when BBH Asia Pacific decided to recreate Stanley Kubrick’s classic, ’The Shining’, they sensibly opted to focus on li’l Danny Torrance on his trike. It’s still pretty spooky though.

One finger, one stolen lollipop, one big interactive adventure. Social media is breathing new life into the ‘choose your own adventure’ stories of the 1980s. BBH Asia has headed to Instagram to create a spooky All Hallow’s Eve quest, ‘Get Lolli’.

Crest and the True Horror of Halloween

Crest’s candy-crazed trick-or-treaters are back and this year they’re in a complete sugar frenzy. Stay in and lock the doors.

Teenagers make terrible decisions. It is known. Down 15 Jägerbombs in 15 minutes? Sure. Take a half eaten apple down to the bin or leave it in a bedroom for three months? Hmm, let me think. But nowhere are their powers of reasoning poorer than in horror movies. Well observed, The Martin Agency. Well observed.

The Americans, it seems, have been raiding British comedy, er, ‘classics’, if this Carry On-inspired spot for Vytautas Mineral Water by Superior is anything to go by.

Batman is out to save the bats in a nicely timed video to promote the upcoming Superman vs. Batman film and draw attention to the plight of the iconic Halloween beastie.

There’s something spooky going on in the Oreo Lab… 360i has whipped up a gothic stop-motion Vine series that unleashes some undeniably tasty-looking cookie monsters into the world.

This one isn’t so much jump-out-your-chair-and-fall-over scary as take-a-long-hard-look-at-the-very-pits-of-your-soul scary. DDB Canada has teamed up with the Vancouver Opera, spoken word artist Shane Koyczan and a slew of street artists to show that there’s a monster in all of us…