Can You Guess What Taco Bell's Top Super Bowl Secret Is? 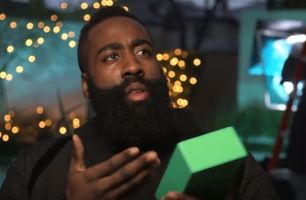 The hype around Taco Bell's Super Bowl spot began back in January with a redacted press-release, letting fans know about the launch of a new product - but not telling them what it was. Extra buzz was created by allowing fans the chance to pre-order the mystery product before its big reveal during the Super Bowl:

Fans could be forgiven for thinking that Taco Bell's new teasers, created by their partners at Deutsch, might shed some more light on the nature of the product. However the ads, featuring The Texas Law Hawk, NBA player James Harden and Alien Expert Giorgio Tsoukalos, use the sense of mystery to comedic effect, with the celebrities having no idea what they are advertising. Instead, the celebs are asked to get enthusiastic about a green brick, with the promise that the product added during post. Whatever the product, the ad itself promises to be clever and comic in equal measure.