Can You Guess 5 Things More Popular than J-Lo This World Cup? 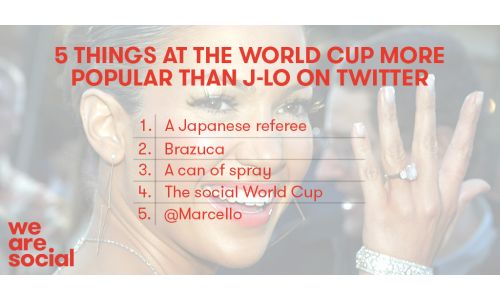 In case you hadn't heard, there's a World Cup going on. The opening ceremony took place last night, with a performance by pop 'megastars' Pitbull and Jennifer Lopez.

J-Lo announced her impending performance to a somewhat lukewarm response - 4,000 retweets from nearly 28m followers (or 0.01%, if you know your engagement rates).

Here's a collection of World Cup related things from last night that were slightly more popular.
1. A Japanese referee:
Since March, the name "Nishimura" has been used 165,000 times on Twitter – and 60% of those mentions came last night after the opening match's ref awarded a rather controversial Brazilian penalty.  Although Neymar and Oscar’s goals made them the evening’s most talked-about players, our man of the match goes to referee Yuichi Nishimura, mentioned 400k times.
2. Brazuca:
A football. It was a big day for Brazuca, gaining a whopping 400k followers in the past 24 hours. That's even more than Neymar (165k) and, it’s definitely more than J-Lo (30k). It's a ball that tweets - what's not to like?
3. A can of spray
When an aerosol can came out last night, there were rumours that Banksy had finally unmasked himself.
It transpired that it was just the referee, equipped with vanishing spray to line up free kicks. It captured the imagination of Twitter, keen to believe in the tagging abilities of the officials - the spray was mentioned almost 20k times. With only one mention, #thugrefs hasn't quite taken Twitter by storm yet, but if it does, you heard it here first.
4. Football! And the social World Cup
This probably won't be the most earth-shattering insight you read today, but the World Cup had a huge impact on the social activity in the two countries playing Thursday night. Based on average volume of Thursday Twitter activity, Brazil and Croatia increased by 25% and 31% respectively. The World Cup matters and we’re (almost) all talking about it.
5.@Marcello
Poor Marcello Ferri. One minute you're an unheard of male model working out in the gym, the next you're receiving death threats for scoring an own goal in the World Cup after being confused for Marcelo Vieira, tweeting from the less obvious @12marcelov.
Some people were perplexed that he managed to tweet whilst playing. It could happen to anyone. The poor guy's plea for the abuse to be aimed at the player's account was retweeted over 11k times.
view more - Creative