Can You Deal with The Guardian's VR Solitary Confinement Experience? 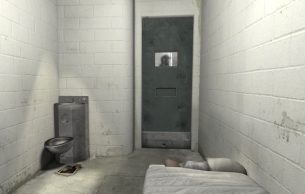 With approximately 100,000 people in solitary confinement in the US, and with some spending 22-24 hours a day in a cell with little to no human contact for days or even decades, the Guardian’s latest project looks to raise awareness and generate discussion around the prevalence of extended solitary confinement, in the form of a unique immersive virtual reality experience.

Collaborating closely with the Guardian, an interactive team from The Mill have worked to produce a nine minute long VR experience titled “6x9: a virtual experience of solitary confinement”. Placing the viewer inside a solitary confinement cell with little more than a bed and toilet, it encourages such psychological effects as blurred vision, hallucinations and a sense of floating that may occur after long-term sensory deprivation.

The Guardian’s “6x9” is an innovative documentary, which utilises game engine technology to create a groundbreaking film. The Mill worked from first-person accounts and documentaries as references for both cell design and spatial audio capture. The cell was designed in Maya and further developed in Unity. Environmental binaural audio was also used which ensured the audio was anchored to the environment, enhancing the sense of space and ensuring the sound continually moved with the viewer.

VR barriers were fully embraced, effects typical after long-term sensory deprivation are played with to mimic a prisoner’s experience of being locked away for 23 hours a day in solitary confinement. This immersive experience provides an innovative style of storytelling used to ignite conversations around the topic of solitary confinement.

The Mill Creative Director Carl Addy comments on the project; "How do you build empathy around an issue as contentious as this? "The task was to give a sense of what isolation feels like. By giving people a visceral experience of solitary confinement we were able to emotionally connect them to the cause.

One of the great tools when directing in VR is body language. Looking at how people react when in an unfamiliar and uncomfortable setting, you can see how they become more absorbed in the space, more closed in and self-protective.

Part of us trying to build empathy was to give a user agency; the ability to make choices and interact with the experience makes you invest emotionally in the narrative and outcome. VR puts you in the cell without any of the safety one gets from the detachment of a screen. This is not like watching a documentary, you are in it."

The Mill Producer Jarrad Vladich says; "It has been a real honour to engage in such a collaborative partnership with the Guardian, on a subject that carries so much public and political opinion in the US.

The Guardian team had a true sensitivity to the subject matter and it was the nature of this collaboration that let us all engage on this project in the same way. Our hope is that this project will not only have an impact on the VR community as a truly immersive story, but more importantly carry a strong message to the people that need to see, hear and feel it most."

Guardian 6x9 was initially pre-launched at Sundance Film Festival on the Gear VR with the public release taking place at Tribeca Film Festival for Google cardboard. Check it out on the Guardian's website here.