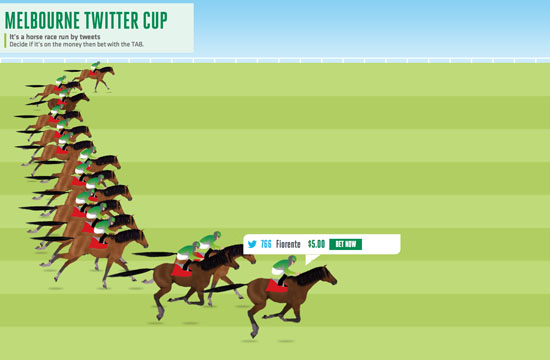 The Melbourne Twitter Cup is a virtual race run by tweets, tracking which horses lead the chat. Built on the innovative MeteorJS development platform, there’s a horse for every actual horse in the field and every time a name is tweeted, the site updates and the corresponding horse moves along a racetrack in real time. Live fixed odds are also displayed for each contender, helping punters to choose a horse and place a bet based on both popularity and odds.

Glenn Lee, TAB’s General Manager Marketing Communications, said: “As the market leader, we are proud to be part of a social media first. At TAB we are constantly looking at ways to improve engagement with our customers and our connection with one of the world’s biggest races – and the Melbourne Twitter Cup does just that.”

Liz Harper, General Manager of Digital Arts Network, added: "Melbourne Cup may very well be the most talked about event in Australian sports. We wanted to see if we could translate that chatter into a fun, data-driven experiment that tracks and displays the facts behind social buzz around this totally Australian event."

Kevin Brown, Technical and Innovation Director of Digital Arts Network, said: “Meteor is a cutting edge technology, which does present some challenges. But we didn’t choose it because it was new; we chose it because it matched our needs and allowed us to build a more engaging product rather quickly, which is what ultimately matters.”

The race can be viewed live now at www.twittercup.com.au and will run right up until the real race begins at 3pm on Tuesday 5 November.