Can Rooney Take On A Bus? W+K Thinks So In These Nike Spots 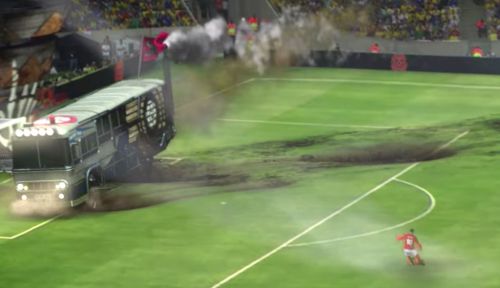 Today, Nike launched a new film called “Attempt the Unthinkable” starring Wayne Rooney as part of its ‘Risk Everything’ Football campaign for 2014. The animated short is the first in a series of three films featuring different members of the England football team showing that risk is in their DNA as they prepare to play on the world's biggest stage. The films were created by Wieden + Kennedy London and STK Films

The first film opens with Rooney receiving the ball during a match against Brasil. Taking the pass inside his own half, Rooney moves towards goal when all of a sudden the Brasil defense disappears and the opposition's team bus is driven onto the pitch to distract him. Skidding into the penalty box, the bus now blocks the net as Rooney advances towards the goal. Just outside the box, Rooney winds up and fires a laser beam of a shot that upends the bus, sending it spinning up and over the net, the ball flaming through the goal and ultimately exploding the scene. Commentator Clive Tyldesley punctuates the strike exclaiming, "Oh yes! You need a bigger bus than that to stop Wayne Rooney!"

Alex Oxlade-Chamberlain stars in the second film, entiled "Fear Nothing":