Can Netflix Make You the Ruler of an Alien Race? 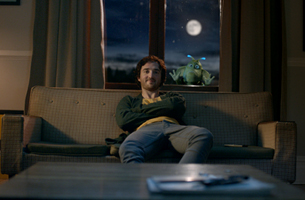 A new brand campaign for the UK, Ireland, The Netherlands and Nordics celebrates the unique connective and transformative power of great stories brought to you through Netflix.

Created with Advertising agency Wieden+Kennedy Amsterdam and with digital development by AKQA Amsterdam, the ‘Great Things Start With Netflix’ campaign launched on January 5th and includes both broadcast and digital.

Netflix touches viewers’ lives with a better, and more personalised, viewing experience, offering TV shows, movies and documentaries, including exclusive and original content accessible anytime, anywhere and on any device. Through the magic of its content and service, great things really can start with Netflix.

This unique point of view on the role of stories is demonstrated by a central film directed by Aaron Stoller, that follows everyday people and the transformations, both big and small, that occur in their lives through watching various titles on Netflix.

Can plunging into the depths of a personalized recommendation forever alter one man’s life? Could you become the ruler of an alien race? And - perhaps even more implausibly - can Netflix bring a smile to the face of an angst-ridden teenager? The central 60-second film, entitled “Big Questions”, heroically and humorously answers these questions, bringing to life those special Netflix moments that unite and inspire viewers.

But ‘Great Things Start with Netflix’ takes on a whole new dimension online. Created by AKQA, an interactive YouTube video launching next week offers an array of hidden additional moments to Big Questions, allowing the audience to literally dive into the world of Netflix and experience how it can influence their lives. Advanced use of UX and a flat content hierarchy lets people explore alternative stories within the TV-spot in an intuitive and playful way. These stories then lead the audience to discover the variety of titles available on Netflix.

Next to the brand film and online experience, three 30-second videos have been created that delve specifically into individual Netflix moments of richer living. The first, ‘Sara’, launches alongside the main film ‘Big Questions’ in January and is a cinematic peek into the life of a once-shy young woman who goes on to explore the world after being inspired by Netflix’s epic new original series ‘Marco Polo’. The other two 30-second spots will launch in the coming months. The first of which, titled Coma, launches in the Netherlands and Nordics later this month.

“In lots of different ways, both big and small, our lives can be changed and enhanced by watching quality entertainment,” says Sean Condon, Wieden+Kennedy Amsterdam Creative Director. “And it's even better if we can choose when and where we watch it. Some of the spots dramatise these moments of change in everyday situations; others tell bigger stories about how entertainment can have a profound effect on viewers’ lives – and diets. But they all build upon Netflix’s brand personality by bringing to life the brand’s fun, entertaining and unique personality through these compelling stories.”

“We always look for new and innovative ways to market Netflix,” said Ashley Wirasinha, vice president of European marketing for Netflix. “Innovative campaigns drive our business. We’re excited by the work Wieden+Kennedy and AKQA have delivered and are keen to explore further creative ideas to bring Netflix to market.”

The ‘Great Things Start With Netflix‘ campaign will air in the UK, Ireland, the Netherlands, Sweden, Finland, Norway and Denmark. The films 'Big Questions’ and ‘Sara’ can be seen on Netflix’s YouTube page now.