Campaign Turns Children Into 'Amazon Warriors' to Fight Against Mosquitoes 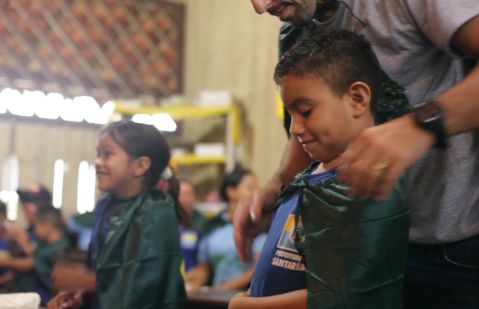 Ananse Química, a Brazilian company specialising in microencapsulation, together with RJR Editora, has launched a collection of children’s books entitled 'Safe Stories, Amazon Warriors, Volume 1.' The collection includes a book that tells the story of warriors who are called to save the forest from devastation, as well as a colouring book, crayons, and a superhero cape. All materials include a major innovation - natural insect repellents were incorporated into the paper’s fibres, into the crayons’ wax, and into the cape’s fabric. The project, created and developed by Little George, the Ketchum Group’s creative hot shop, unites nanotechnology and micro-capsules of insect repellent, transforming a moment of fun and learning into a form of protection for the community’s children.

“We sought out Little George to help us create a social project that would allow us to help families and caretakers protect children from the mosquitoes that transmit diseases such as malaria, yellow fever, and dengue. When they presented the idea of the book, we knew we had found a way to meet our objectives and generate a great social impact,” said Claudia Galvão, CEO of Ananse Química.

To launch the project, free kits were distributed to families in the community of Tapara Miri, in the Brazilian state of Pará. In order to choose the correct location to test the technology, the project partnered with IPAM (National Research Institute of the Amazon). IPAM tested the effectiveness of the repellent when applied to the books and also helped identify which communities most needed to receive this type of support. They also assisted in providing logistical support to the team.

During the first step of the project, two thousand kits are expected to be distributed. By the end of the year, project organisers hoped to distribute up to 20 thousand units. For the next steps of the project, the publishing house RJR, in partnership with Ananse, will map out regions in Brazil where cases of mosquito-borne diseases are concentrated and will expand the project to include these regions.

The collection 'Safe Stories - Amazon Warriors' includes books whose pages are treated with varnish that includes micro-capsules of insect repellent. These micro-capsules are activated when the book is used. Furthermore, the wax used for the crayons included in the collection also contains insect repellent, as do the fibres in the fabric used to create the superhero capes. The repellent is composed of citronella oil, Neem oil, and clove oil. The repellent’s effect lasts for up to three months, depending on the frequency of use. “For future launches, we want to add andiroba oil, extracted from plants found in the north of Brazil, as this oil is also a strong repellent,” explained Claudia Galvão.

This piece was created as an alternative for parents and caretakers who are constantly searching for solutions to repel mosquitoes. It was especially important to protect children living in risky situations or in communities where purchasing insect repellents to protect against mosquito-borne illnesses is not an option. In addition to the books and crayons, the collection’s superhero cape was created so that each child could become an Amazon Warrior and protect themselves against diseases, such as yellow fever and malaria, that are becoming increasingly bigger threats in the north of Brazil.

“We are launching a product that will innovate in the area of olfactory marketing. We spent more than six months in development before creating the ideal formula: a special varnish - different from the varnishes typically used by printers - that was created specifically for this collection. This year, in addition to the books, we will use the insect repellent varnish in sets that include superhero capes and many different colors of crayons, empowering children to fight against mosquitoes,” said Gabriel Araújo, Vice-President of Creative at Little George and the project’s creator.