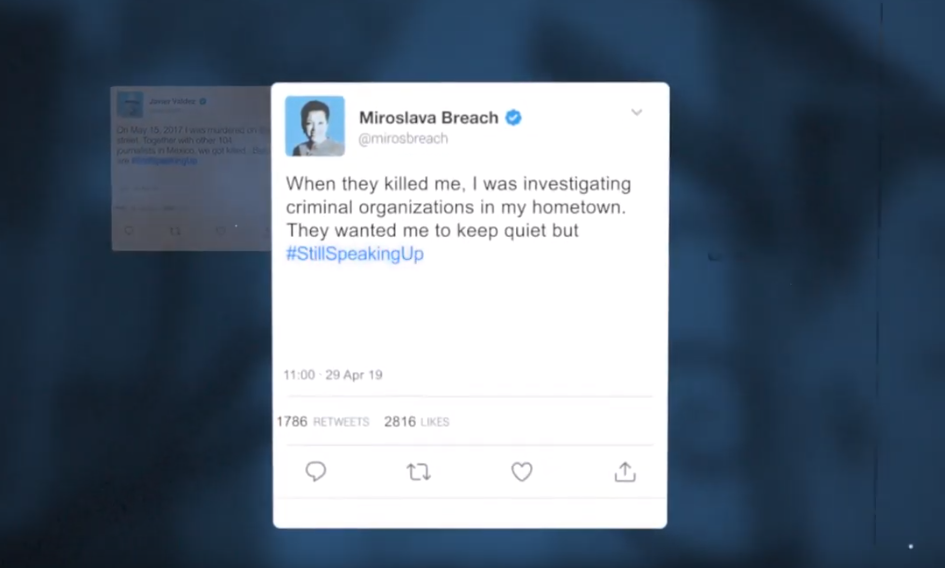 Mexico is one of the deadliest countries for journalists. Between 2007 and 2019, 106 murders of journalists have been recorded in which the motive for the crime has been their work.

#SeguimosHablando (StillSpeakingUp) is an initiative that is the culmination of two years working with the families of four killed journalists: Miroslava Breach, Javier Valdez, Moisés Sánchez and José Armando Rodríguez 'El Choco'. It is also an effort to construct a narrative to give them a voice, so these injustices are not forgotten.

#SeguimosHablando was first launched in Twitter, on April 29th, the same week as World Pres Freedom Day (May 3rd). In Mexico this day has a different meaning due to the sombre situation caused by the violence in which journalists are living every day, which prevents them from even be able to report it.

The organisation Propuesta Civica, dedicated to offer legal defence to journalists at risk, launched the initiative #SeguimosHablando as part of their fight to help human rights to be enforced.

Sara Mendiola, general director of Propuesta Cívica, said: “It is vital to make visible the situation that Mexico is facing in issues like free speech: the number of attacks, intimidation and murders of journalists in the country are alarming. To this day, the State has been overwhelmed, the federal government does not have a strategy in their agenda that guarantees that this situation will change. Making this situation visible in the local sphere and then giving it an international scope can show the impact (this is having) and makes possible to convert it in a symbolic weapon that pressures the Mexican government.”

Diego Wallach, Publicis Mexico’s chief creative officer, commented: “The situation for journalists in the country is unbearable and it’s not only about the murders. When we were working with the families of Javier, Miroslava, Moises y 'El Choco' we realised that this violence has left a mark in more than a hundred families. We began to study the work, language and other aspects in the life of these four journalists, trying to give them a voice that portrayed the way each one talked. This campaign demands justice for all the members of the press that have been murdered and is trying to make visible this tragedy, all as the first step to boost concrete actions to end with this problem.”

In the next hours after being set in motion, the campaign #SeguimosHablando became a trending topic in social media in Mexico, thanks largely to the great reaction that journalists, activists, celebrities, media, non-government organisations and people in general had.

Rapidly, newspapers and broadcast media echoed the campaign, which had mentions in radio, TV and international media.