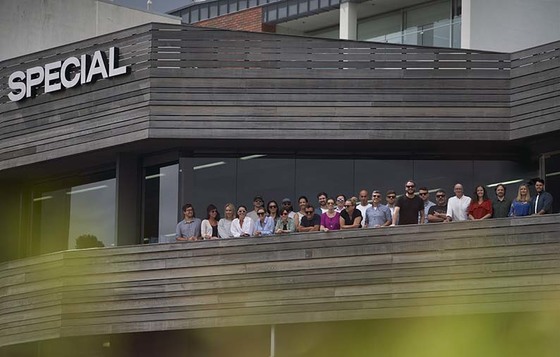 Incredibly, Special Auckland has only 30 staff, yet the agency's world-class creative work, impressive award performance, and strong new business wins prove the agency has punched well above its weight to demonstrate that size really doesn't matter.

With a confidence the agency could do things differently, do things better and ultimately make a difference to a company's bottom line, Special Group Auckland founder and executive creative director, Tony Bradbourne, says that although 'CB Agency of the Year' recognition came as quite a shock, it truly validates everything the agency has worked hard to achieve.

"It was a huge surprise - and we very nearly didn't enter; we were just so busy at the end of last year," Bradbourne admits.

"And, if I can be honest, last year was really challenging; we parted ways with founding partner Rob Jack, we re-pitched a major client in 2degrees, retained it against overwhelming odds, and then after all of that, very happily walked away from the relationship six months later, and as a result, said goodbye to some good friends."

However the silver lining was just around the bend as Special put its collective head down and continued to produce standout work for a host of ambitious clients.

"We tried harder each and every single day, constantly innovating, backed our people, believed in what we do uniquely well at Special, won new clients, welcomed incredible new talent and finished the year stronger and happier than ever," he adds.

Special managing partner Michael Redwood agrees the good news was unexpected: "Special Group has enjoyed many years of seeing our creative work dominate the award shows in New Zealand, but we always felt that sheer scale would always tip things in the multinationals' favour," he says. "We are over the moon that Campaign Brief has recognised Special's pound for pound performance this year - it's a deeply satisfying way to start our tenth year in business."

Bradbourne's most favoured award winners from last year include the agency's massively popular 'Data Hunt' campaign for 2degrees, a very different modern style of campaign that created mass engagement on a mobile by mobile basis, new work for Uber with 'Ask Sam', because he believes it to be "equally ambitious and generous", and TSB 'Changes' because it "goes to a place you don't usually see in bank advertising", along with the agency's consistent work for Holden. He also nods to  Tourism New Zealand's 'Backpackagram' for being a totally unique way to attract tourism to the country.

"But the truth is I like all of our work across the board - in mobile, design, TV, innovation - rather than one standout piece," he adds.

Lowe says the Auckland Art Gallery also put on a brilliant show about nudes with a fantastically tricky comms brief: 'You can't show the nudes'.