The brewery is giving away over 45,000 beers in an innovative ad campaign to celebrate the fact that Britain can (finally) enjoy a socially distanced beer together 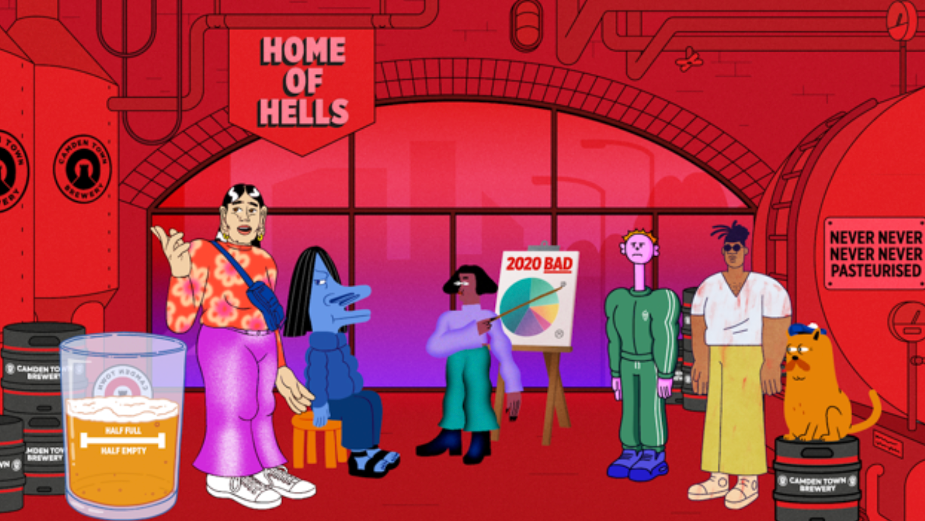 Camden Town Brewery has always pioneered pairing fresh thinking with fresh beer, which it’s demonstrating once again with its latest advertising campaign - the world’s first TV ad you can (kind of) drink.

It turns out that one in three Brits sorely missed sharing a beer with friends over anything else during lockdown, so in an effort to lift the spirits of the nation, Camden is giving away 45,000 free beers, which viewers can redeem, immediately, through their TVs to enjoy with their friends at a distance.

To be in with a chance of winning fresh, never pasteurised Camden Hells Lager delivered straight to their door, viewers just need to keep an eye out for the QR codes in the advert and scan them with their phone camera. There are six, 12 and 24 packs to be won.

The campaign, launching during the Champions League semi-finals on 18th and 19th August, uniquely combines medium and message to create a genuinely category redefining idea. Created by Wieden+Kennedy (creative) and Bountiful Cow (comms planning and media) with W leading on PR and influencer engagement, it builds on Camden’s love of design and brings together a variety of design styles from four of the freshest illustrators.

The ad features an animated Camden Town Brewery and a mix of fictional characters inspired by the beer team. From Half Pint who flip flops between optimism and pessimism, to Pub Cat who identifies as 5% cat and 95% Glaswegian with a strange fascination of QR codes. All illustrations were created by Guy Field, Sophie Koko Gate, José Fatkinson and Bridget Meyne who hail from Blink’s esteemed London animation studio.

Jasper Cuppaidge, founder at Camden Town Brewery said: “2020 has been a tough year for everyone, and we’ve tried to help wherever we can with our lockdown initiatives that aimed to support the hospitality industry and NHS staff and charities across the UK. But now, we wanted to give the great British public the chance to finally share a fresh (socially distanced) beer with friends. We know it’s a small gesture, but we hope to bring some much-needed cheers in the very best way we know how – with fresh beer!

Adam Newby and Will Wells, creatives at Wieden+Kennedy London say: "For part one of Camden Town Brewery’s ‘Fresh as Hells’ campaign we’re launching ‘The Telly Ad You Can Drink…Kind Of’.

"We’ve collaborated with director James Papper and four of the freshest illustrators on the internet to bring the London-based brewery, and its employees, to life in full animation. The visually eclectic mix of characters decide that the best way they can make 2020 slightly less bad is to give the British people free beer, through their televisions.

"You cannot actually drink through your TV. So we decided to incorporate the innovative advertising technology of 'Q-R-codes' to deliver fresh Camden Hells straight to the doors of beer lovers around England. A beer advert you can drink - take that 2020!”

Graeme Douglas, co-founder at Bountiful Cow, said: “For a category so interesting the comms around beer are remarkably dull. By creating work that combines medium and message in such a clever little bundle we’re trying to put a dent that dullness. God knows this year needs it”