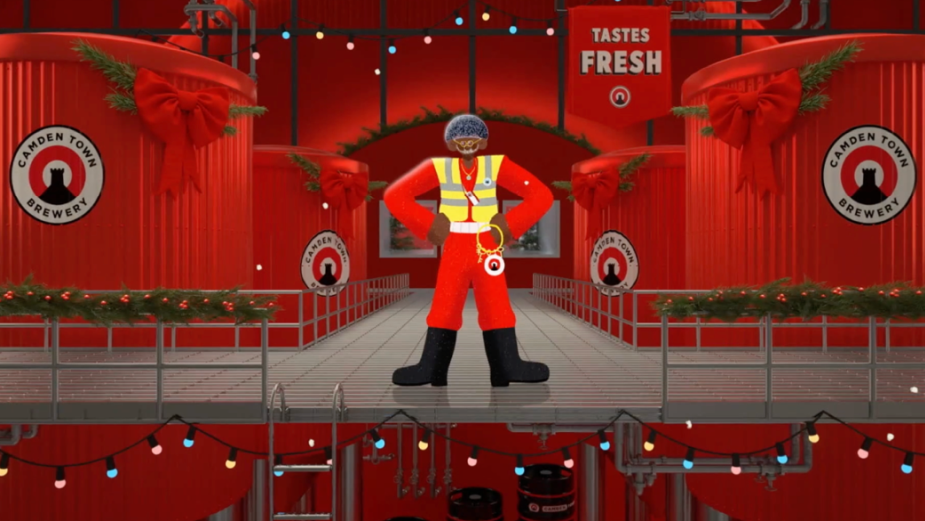 The animated TV ad harnesses the power of ‘Giftnosis’, Camden’s fictional festive hypnosis, to get gift givers putting down those unwanted socks and toiletry gift sets in favour of a pack of fresh tasting Camden Hells Lager. Depicted in Camden’s animated brewery, high up in the steel walkways, a new character from the Camden beer world is revealed.

Introducing: the Camden Giftnotist. Dressed in red overalls and shiny black boots, the Giftnotist, voiced by grime icon D Double E, with his ultra-mellow, super-smooth voice is on a mission to save Christmas from all the terrible gifters out there and gift fresh, never pasteurised Camden Hells Lager instead.

Joining Mr Double in the illustrated Giftnosis world is the brewery’s very-own Christmas angel, and approximately 511 Camden logos (but who’s really counting). With a soundtrack of soft drum and bass and a hypnotising graphic of swirls, Camden’s first festive telly ad is here to save any ‘secret santa’ faux pas or predictable prezzie disappointment with fresh tasting beer.

The campaign has been created by advertising agency Wieden+Kennedy, tapping into the insight of notoriously bad gifts being given by distant family or random work colleagues at Christmas. Renewing their collaboration with director James Papper and fresh and upcoming illustrator Vivienne Shao. Continuing to own its distinctive animated advertising style, Camden is gradually expanding on its fictional beer world by showing new parts of the brewery and debuting new Camden characters.

The new ‘Giftnosis’ ATL marks the second TV campaign to come from Camden this year following its Hells Lager ‘Recall’ in May, positioning the iconic Hells Lager as the beer to be drinking throughout the festive period. In addition to the nationwide telly ad, the ‘Giftnosis’ creative will be used in digital OOH sites in shopping malls around the UK, stopping those bad gift givers in their tracks and encouraging them to pick up a pack of Hells Lager instead.

Additionally, this is the first Camden campaign to be introduced into both the on-trade and off-trade spaces. Leaning into festive traditions, Camden’s Giftnosis will take over the window at Wholefoods’ Kensington store, and for those hoping to Giftnotise their pals into buying a few pints this Christmas, keep an eye out for the full ‘Giftnosis’ on-trade toolkit.

Comms planning, media and OOH campaign streams have been lead by Bountiful Cow, with W Communications leading on PR.

Zoe Wulfsohn-Dunkley, head of brand marketing of Camden Town Brewery, said: “2021 has been a landmark year for us at the Camden team as it’s been the first year we’ve launched not one, but two nationwide ATL campaigns. And in another brand-first, our latest TV ad marks our first-ever festive campaign to hit beer lovers’ screens. We can all relate to receiving those not-so-great Christmas gifts from a distant aunt or random work colleague, and although we love the generosity that comes with the festive season, we want people to resist the bad gifts and gift  fresh Camden Hells Lager instead… because who doesn’t love great tasting, never pasteurised beer?”

Ian Daly, Head of AV at Bountiful Cow, said: “Forget the worn-out Christmas playbook… Giftnosis is a totally different take on festive advertising that we’re proud to be a part of. The creative platform has given us a brilliant opportunity to supercharge media channels big and small to demand attention at the most competitive time of year.”

Camden’s ‘Giftnosis’ ad will be hypnotising screens from Monday 15th November. It will be running for five weeks in the run up to Christmas, spreading that Camden Hells cheer(s) to all the bad gift givers out there to make sure this year’s festivities are fresher than ever before.