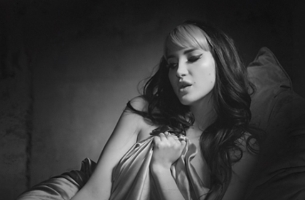 “The 27 Club video was inspired by my obsessions with vintage wet plate photography and the visual aesthetics of French New Wave cinema,” states Macdiarmid. “I wanted to create a film that was all about bold compositions and manipulation of shadows, so shooting in black and white felt like the most natural fit."

Shot on location in a burnt-out house in London, the film finds the singer confronted by the personification of 'Death' who transports her to a surreal world of decay where she too will join the infamous 27 Club.

“Chloe was a total gift. She was so committed to the concept from the get go,” he adds. “Even the pigs’ brains and ants didn’t seem to phase her. Which was lucky given that the ants didn’t always behave themselves, scuttling away, trying to avoid the light, as soon as we put them on Chloe. They weren’t shy about reappearing all over us long after shooting had wrapped though.”