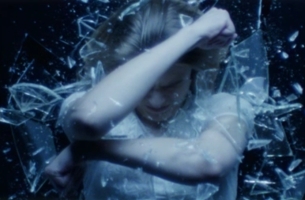 Calum Macdiarmid has just completed ‘Into the Glass’, the ethereal music video for singer/songwriter Laura Doggett’s latest track from her newly released EP.

The story of escaping an unhealthy relationship is told through a mixture of conceptual narrative and performance, scored by Laura’s unique, distinctive voice that many in the industry have described as ‘spine-tingling’.

The film finds Laura waking next to her boyfriend in the middle of the night.  As she steps away from the bed, the surroundings transform into a darker, more abstract and intangible space. Discovering another world through a pane of glass at the end of this space, hinted at by the writhing bodies beyond it, she wrestles with the decision that lies before her, ultimately sprinting towards the glass as the song reaches its apex, smashing through to a new life and leaving the old one behind.

“We filmed 'Into The Glass' in one very long day which, in retrospect, was pretty ambitious given the various set ups and stunt work required,” laughs Macdiarmid “I’m a huge fan of Gregory Crewdson’s photographic work and wanted to evoke a similarly heightened reality in the look of the piece. I think the DOP, Ian Murray, did a fantastic job of realising this specific mix of the real and ethereal that I was after.”

“Laura was a great sport,” he adds. “She’s a very physical performer and was totally committed to the concept. Also she was surprisingly up for jumping in a tank of freezing water and running through a pane of glass which was awesome, as performing the stunts herself gave the film a real authenticity that allowed us to properly focus on that key moment in the final film.”